Glass stronger and tougher than steel? A new type of damage-tolerant metallic glass, demonstrating a strength and toughness beyond that of any known material, has been developed and tested by a collaboration of researchers with the U.S. Department of Energy (DOE)'s Lawrence Berkeley National Laboratory (Berkeley Lab)and the California Institute of Technology. What's more, even better versions of this new glass may be on the way.

"These results mark the first use of a new strategy for metallic glass fabrication and we believe we can use it to make glass that will be even stronger and more tough," says Robert Ritchie, a materials scientist who led the Berkeley contribution to the research.

The new metallic glass is a microalloy featuring palladium, a metal with a high "bulk-to-shear" stiffness ratio that counteracts the intrinsic brittleness of glassy materials.

"Because of the high bulk-to-shear modulus ratio of palladium-containing material, the energy needed to form shear bands is much lower than the energy required to turn these shear bands into cracks," Ritchie says. "The result is that glass undergoes extensive plasticity in response to stress, allowing it to bend rather than crack."

Ritchie, who holds joint appointments with Berkeley Lab's Materials Sciences Division and the University of California (UC) Berkeley's Materials Science and Engineering Department, is one of the co-authors of a paper describing this research published in the journal Nature Materials under the title "A Damage-Tolerant Glass."

Co-authoring the Nature Materials paper were Marios Demetriou (who actually made the new glass), Maximilien Launey, Glenn Garrett, Joseph Schramm, Douglas Hofmann and William Johnson of Cal Tech, one of the pioneers in the field of metallic glass fabrication.

Glassy materials have a non-crystalline, amorphous structure that make them inherently strong but invariably brittle. Whereas the crystalline structure of metals can provide microstructural obstacles (inclusions, grain boundaries, etc.,) that inhibit cracks from propagating, there's nothing in the amorphous structure of a glass to stop crack propagation. The problem is especially acute in metallic glasses, where single shear bands can form and extend throughout the material leading to catastrophic failures at vanishingly small strains.

In earlier work, the Berkeley-Cal Tech collaboration fabricated a metallic glass, dubbed "DH3," in which the propagation of cracks was blocked by the introduction of a second, crystalline phase of the metal. This crystalline phase, which took the form of dendritic patterns permeating the amorphous structure of the glass, erected microstructural barriers to prevent an opened crack from spreading. In this new work, the collaboration has produced a pure glass material whose unique chemical composition acts to promote extensive plasticity through the formation of multiple shear bands before the bands turn into cracks.

"Our game now is to try and extend this approach of inducing extensive plasticity prior to fracture to other metallic glasses through changes in composition," Ritchie says. "The addition of the palladium provides our amorphous material with an unusual capacity for extensive plastic shielding ahead of an opening crack. This promotes a fracture toughness comparable to those of the toughest materials known. The rare combination of toughness and strength, or damage tolerance, extends beyond the benchmark ranges established by the toughest and strongest materials known."

The initial samples of the new metallic glass were microalloys of palladium with phosphorous, silicon and germanium that yielded glass rods approximately one millimeter in diameter. Adding silver to the mix enabled the Cal Tech researchers to expand the thickness of the glass rods to six millimeters. The size of the metallic glass is limited by the need to rapidly cool or "quench" the liquid metals for the final amorphous structure.

"The rule of thumb is that to make a metallic glass we need to have at least five elements so that when we quench the material, it doesn't know what crystal structure to form and defaults to amorphous," Ritchie says.

The new metallic glass was fabricated by co-author Demetriou at Cal Tech in the laboratory of co-author Johnson. Characterization and testing was done at Berkeley Lab by Ritchie's group.

"Traditionally strength and toughness have been mutually exclusive properties in materials, which makes these new metallic glasses so intellectually exciting," Ritchie says. "We're bucking the trend here and pushing the envelope of the damage tolerance that's accessible to a structural metal."

The characterization and testing research at Berkeley Lab was funded by DOE's Office of Science. The fabrication work at Cal Tech was funded by the National Science Foundation.

Lawrence Berkeley National Laboratory is a U.S. Department of Energy (DOE) national laboratory managed by the University of California for the DOE Office of Science. Berkeley Lab provides solutions to the world's most urgent scientific challenges including sustainable energy, climate change, human health, and a better understanding of matter and force in the universe. It is a world leader in improving our lives through team science, advanced computing, and innovative technology. Visit our at www.lbl.gov 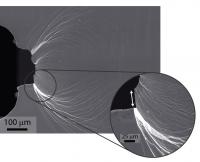