Anyone who visits the Great Barrier Reef in Australia, Southeast Asia's coral triangle, or the reefs of Central America, will surely speak of how stunning and vibrant these environments are. Indeed, coral reefs are believed to house more biodiversity than any other ecosystem on the planet, with the coral providing protection and shelter for hundreds of species of fish and crustaceans.

But these ecosystems are under threat. Global pressures, such as rising ocean temperatures, are causing coral to turn ghostly white, a phenomenon called bleaching, and die. One family of coral - Acropora - seems to be particularly susceptible and its numbers are expected to decline in the future. This is especially concerning as these corals are fast growers and thus structurally important for the reefs. Researchers took a close look at Acropora tenuis, a species within this family, which is known to have three color morphs - brown, purple, and yellow-green. Their new study, published in G3: Genes|Genomes|Genetics, indicates that these color morphs speak of the coral's resilience to high temperatures, and found the underlying genetic factors that seem to be responsible for this.

"Coral reefs are very beautiful and have a whole variety of different colors," said Professor Noriyuki Satoh, who leads the Marine Genomics Unit at the Okinawa Institute of Science and Technology Graduate University (OIST). "When we started looking at the different color morphs of A. tenuis we noticed that some morphs bleach more readily and die more frequently than others. During the summer of 2017, we saw that many of the brown and purple morphs bleached, with the brown morph dying at a higher rate, but the yellow-green morph seemed to show resilience to the summer temperatures."

The Unit worked with several individuals from the Okinawan community, including Koji Kinjo from Sea Seed, who directs a private aquarium where the different color morphs have been grown for around 20 years. This aquarium was instrumental for the researchers to observe the coral over the last two decades and to determine how resilient this species is to climate change, and the underlying causes.

In 2020, Professor Satoh and his collaborators decoded the genome of A. tenuis, which provided them with the toolkit for this research, allowing them to look at the genetic foundations that cause the different morphs.

"At first, we thought the difference in resilience might be linked to the corals housing different kinds of symbiotic algae, which photosynthesize for the coral and thus provide the coral with energy. Previous research has shown that some symbiotic algae are more resilient to climate change than others. But when we looked at the three-color morphs, we found that they all housed very similar algae," explained Professor Satoh.

As can be expected, they found that the green morph expressed high quantities of FGPs, but the researchers found that two of the five were expressed at particularly high levels. More surprising was that these two proteins were expressed at even higher levels during summer, which indicates that they help the coral to withstand warmer temperatures. Specifically, these proteins seemed to protect the symbiotic algae, which meant that this color morph experienced very little bleaching.

In contrast, the corals with the brown color morph, which express much lower quantities of these two proteins, bleached by around 50% over July and August 2017.

"Coral reefs are so important for biodiversity," concluded Professor Satoh. "Finding out more about them will help us to conserve them. Right now, we cannot help so much about the coral reef situation but gathering this fundamental knowledge, understanding how corals work, is very important for long-term conservation."

This research has showcased that the color morphology of coral is very much involved in its response to high temperatures. The underlying reasons behind this, such as exactly how the green fluorescent protein protects the symbiosis, will no doubt be the topic of research in the future.

Professor Satoh and his Unit worked with people from Umino-Tane Co. LTD, IDEA Consultants, Inc., and Okinawa Environmental Research Co., Ltd., as well as researchers from the University of Tokyo. In addition, OIST's DNA Sequencing Section and Imaging Section were also involved in this project. 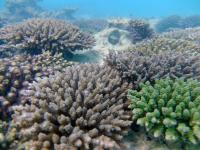 Acropora Tenuis is found around Okinawa