Johns Hopkins scientists say they have figured out how bacteria that cause diarrhea may also be the culprit in some colon cancers. The investigators say that strains of the common Bacteroides fragilis (ETBF) dupe immune system cells into permitting runaway colon tissue inflammation, a precursor for malignant growth.

"This could be the H. pylori of colon cancer," says Johns Hopkins infectious disease specialist, Cynthia Sears, M.D., referring to the bacteria long known to cause stomach ulcers and suspected of causing the majority of stomach cancers. Her studies suggest that ETBF uses tissue inflammation to cause colon cancer in a similar way that H. pylori causes stomach tumors.

A so-called enterotoxigenic bacterium, the germ is widely known to cause diarrhea in children and adults in the developing and developed world, and a previous study in Turkey has linked it to colon cancer.

The bacteria, which colonize in the gut, cause no symptoms in some individuals, but others develop diarrhea and colon inflammation, which has been linked to cancer growth. Unlike the case with H. pylori, it is unknown whether standard antibiotics can eradicate the microbe, experts say.

To track the link between ETBF and colon cancer, the Johns Hopkins researchers conducted a series of tests in mice bred to carry mutations in a colon cancer-causing gene called APC.

Their results, published in the August 23 issue of Nature Medicine, show that mice infected with ETBF developed diarrhea which resolved quickly, but within a week, developed inflammation and small tumors in the colon. One month later, the colons were pockmarked with tumors.

Mice infected with a non-toxin producing strain of the bacteria were free of diarrhea, inflammation and tumors.

Next, Sears and the Johns Hopkins team evaluated the bacteria's effect on immune responses that may contribute to cancer development.

In ETBF-infected mice, they found high levels of a protein called pStat3, which, in its normal role, acts as a signal to trigger inflammation. One of those signals activates an immune cell called T-helper 17 (Th17). Th17 cells produce molecules that have been implicated in fostering inflammation of tissues.

Th17 activity in the gut of germ-bearing mice was 100 times greater than normal, according to the investigators, and when they blocked the effects of Th17, they were able to reverse inflammation and tumor growth.

Drew Pardoll, M.D., Ph.D., an immunologist and cancer researcher at Johns Hopkins, speculates that in humans, infection with ETBF "produces a low-level inflammation that persists for a long time."

"If what we are seeing in mice holds true in humans, the chronic inflammation damages genetic material in the colon cells, allowing them to grow uncontrollably and develop into tumors earlier and more progressively than if they were not infected with ETBF," Pardoll says.

Sears first witnessed the impact of diarrheal pathogens two decades ago in a refugee camp in Thailand where children, especially, were vulnerable to infection where water sanitation is poor. Most diarrheal disease is short-lived but can be very severe, Sears says, and it is common worldwide. The ETBF microbe is found in the gut of up to 20 to 35 percent of children and adults and, according to the Turkish study, in as many as 40 percent of colon cancer patients.

Sears and Pardoll believe that ETBF may collude with other types of normal bacteria in the gut to promote cancer. The microbe itself is difficult to culture from stool specimens, according to the investigators, so they are working on blood tests to detect antibodies to the pathogen's toxin, which may show whether an individual has been exposed to it and perhaps determine who may be at risk for colon cancer.

The investigators also envision vaccines and drug therapies that neutralize the pathogen's toxin and its ability to inflame tissues.

Provisional patents for this technology have been filed.

Funding for the study was provided by the Crohn's and Colitis Foundation, the National Institutes of Health, Bernard Schwartz, William and Betty Topercer, Dorothy Needle, Bud Swartz, and the Commonwealth Foundation.

Photos of the ETBF bacteria and ETBF-induced mouse tumors are available upon request.

How diarrheal bacteria cause some colon cancers revealed in mouse studies 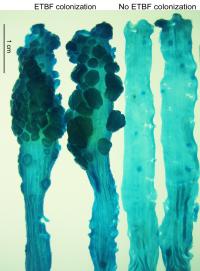