MUSC Hollings Cancer Center researcher Yongxia Wu, Ph.D., identified a new target molecule in the fight against graft-versus-host disease (GVHD). Bone marrow transplant, a treatment for certain blood cancers, is accompanied by potentially life-threatening GVHD in nearly 50% of patients. A January 2021 paper published in Cellular and Molecular Immunology revealed that activating a molecule called STING may be a new approach to reduce GVHD.

Xue-Zhong Yu, M.D., professor in the Department of Microbiology and Immunology, focuses on understanding the intricate immune mechanisms that regulate GVHD development and anti-tumor activity.

Recently, STING (stimulator of interferon genes) has been highly studied in the context of cancer. Data from other groups has shown that STING activation in T cells helps the immune cells fight cancer. Cancer cells are essentially a "bad" version of the body's own cells and an appropriate target for its immune system. In contrast, in the case of GVHD, T cells fight the body's own "good" cells - in essence, the body attacks itself. Based on the previous data, it seemed logical that high STING activation, though good when it comes to cancer, would be bad in the context of GVHD. Yu's findings in a mouse model of GVHD confirmed this hypothesis. In the mouse model, which was obtained from collaborator Chih-Chi Andrew Hu, Ph.D., a Wistar Institute professor of Pathology and Laboratory Medicine, GVHD was induced by bone marrow transplant, which closely models the disease development in humans.

Work from other research groups in cancer has demonstrated that STING signaling can regulate antigen- presenting cell function. STING is an important molecule in a DNA-sensing pathway that results in the production of inflammatory cytokines. But it is not known how STING regulates these cells in the context of GVHD.

Yu and collaborators then looked at different cell subsets to try and understand which cells were most impacted by the loss of STING. Surprisingly, STING expression in the recipient mouse's antigen-presenting cells (dendritic cells) reduced donor T cell expansion and migratory ability after bone marrow transplant. In other words, it made it less likely that the T cells of the recipient mouse would attack its "good" cells and lead to GVHD. This finding was confirmed using a pharmacological drug that turned on the STING molecule. Activating STING in the host before transplantation reduced GVHD severity.

The finding in a mouse model that activating STING with a pharmacological drug reduced GVHD could be clinically relevant in that it suggests the possibility that a STING-activating drug might protect bone marrow transplant recipients from GVHD. Much more basic and clinical research will be required to assess that possibility, but Yu's findings suggest that such research is warranted.

To understand why the research team observed what they did, they will continue to unravel the biological functions of the STING molecule. Unanswered questions include what makes STING function differently in different immune cell subsets.

"Tools such as the mice from our collaborator allow us to study this more thoroughly. Total-body deletion of a protein does not allow for specific study in cell subsets, and we think that STING must have different roles in different cells," explained Yu.

MUSC Hollings Cancer Center is a National Cancer Institute-designated cancer center and the largest academic-based cancer research program in South Carolina. The cancer center comprises more than 100 faculty cancer scientists and 20 academic departments. It has an annual research funding portfolio of more than $44 million and a dedication to reducing the cancer burden in South Carolina. Hollings offers state-of-the-art diagnostic capabilities, therapies and surgical techniques within multidisciplinary clinics that include surgeons, medical oncologists, radiation therapists, radiologists, pathologists, psychologists and other specialists equipped for the full range of cancer care, including more than 200 clinical trials. For more information, visit hollingscancercenter.musc.edu. 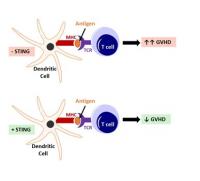