The discovery of young stars in old star clusters could send scientists back to the drawing board for one of the Universe's most common objects.

Dr Bi-Qing For, from the International Centre for Radio Astronomy Research in Perth, said our understanding of how stars evolve is a cornerstone of astronomical science.

"There are a billion trillion stars in the Universe and we've been observing and classifying those we can see for more than a century," she said.

"Our models of stellar evolution are based on the assumption that stars within star clusters formed from the same material at roughly the same time."

A star cluster is a group of stars that share a common origin and are held together by gravity for some length of time.

Because star clusters are assumed to contain stars of similar age and composition researchers have used them as an "astronomical laboratory" to understand how mass affects the evolution of stars.

"If this assumption turns out to be incorrect, as our findings suggest, then these important models will need to be revisited and revised," Dr For said.

The discovery, published today in the Monthly Notices of the Royal Astronomical Society, involves a study of star clusters located in the Large Magellanic Cloud, a neighbouring galaxy to the Milky Way.

"The formation of these younger stars could have been fuelled by gas entering the clusters from interstellar space," said co-author Dr Kenji Bekki, also from the International Centre for Radio Astronomy Research.

"But we eliminated this possibility using observations made by radio telescopes to show that there was no correlation between interstellar hydrogen gas and the location of the clusters we were studying.

"We believe the younger stars have actually been created out of the matter ejected from older stars as they die, which would mean we have discovered multiple generations of stars belonging to the same cluster."

Dr Bekki said the stars were currently too faint to see using optical telescopes because of the dust that surrounds them.

"They have been observed using infrared wavelengths by orbiting space telescopes Spitzer and Herschel, operated by NASA and the European Space Agency," he said.

"An envelope of gas and dust surrounds these young stars but as they become more massive and this shroud blows away, they will become visible at optical wavelengths for powerful instruments like the Hubble Space Telescope."

"If we point Hubble at the clusters we've been studying, we should be able to see both young and old stars and confirm once and for all that star clusters can contain several generations of stars."

'A discovery of young stellar objects in older clusters of the Large Magellanic Cloud', in the Monthly Notices of the Royal Astronomical Society published by Oxford University Press on 7 March 2017. 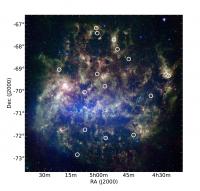