PASADENA, Calif.—There's a theory about how the Marinoan ice age—also known as the "Snowball Earth" ice age because of its extreme low temperatures—came to an abrupt end some 600 million years ago. It has to do with large amounts of methane, a strong greenhouse gas, bubbling up through ocean sediments and from beneath the permafrost and heating the atmosphere.

The main physical evidence behind this theory has been samples of cap dolostone from south China, which were known to have a lot less of the carbon-13 isotope than is normally found in these types of carbonate rocks. (Dolostone is a type of sedimentary rock composed of the carbonate mineral, dolomite; it's called cap dolostone when it overlies a glacial deposit.) The idea was that these rocks formed when Earth-warming methane bubbled up from below and was oxidized—"eaten"—by microbes, with its carbon wastes being incorporated into the dolostone, thereby leaving a signal of what had happened to end the ice age. The idea made sense, because methane also tends to be low in carbon-13; if carbon-13-depeleted methane had been made into rock, that rock would indeed also be low in carbon-13. But the idea was controversial, too, since there had been no previous isotopic evidence in carbonate rock of methane-munching microbes that early in Earth's history.

And, as a team of scientists led by researchers from the California Institute of Technology (Caltech) report in this week's issue of the journal Nature, it was also wrong—at least as far as the geologic evidence they looked at goes. Their testing shows that the rocks on which much of that ice-age-ending theory was based were formed millions of years after the ice age ended, and were formed at temperatures so high there could have been no living creatures associated with them.

"Our findings show that what happened in these rocks happened at very high temperatures, and abiologically," says John Eiler, the Robert P. Sharp Professor of Geology and professor of geochemistry at Caltech, and one of the paper's authors. "There is no evidence here that microbes ate methane as food. The story you see in this rock is not a story about ice ages."

To tell the rocks' story, the team used a technique Eiler developed at Caltech that looks at the way in which rare isotopes (like the carbon-13 in the dolostone) group, or "clump," together in crystalline structures like bone or rock. This clumping, it turns out, is highly dependent upon the temperature of the immediate environment in which the crystals form. Hot temperatures mean less clumping; low temperatures mean more.

"The rocks that we analyzed for this study have been worked on before," says Thomas Bristow, the paper's first author and a former postdoc at Caltech who is now at NASA Ames Research Center, "but the unique advance available and developed at Caltech is the technique of using carbonate clumped-isotopic thermometry to study the temperature of crystallization of the samples. It was primarily this technique that brought new insights regarding the geological history of the rocks."

What the team's thermometer made very clear, says Eiler, is that "the carbon source was not oxidized and turned into carbonate at Earth's surface. This was happening in a very hot hydrothermal environment, underground."

In addition, he says, "We know it happened at least millions of years after the ice age ended, and probably tens of millions. Which means that whatever the source of carbon was, it wasn't related to the end of the ice age."

Since this rock had been the only carbon-isotopic evidence of a Precambrian methane seep, these findings bring up a number of questions—questions not just about how the Marinoan ice age ended, but about Earth's budget of methane and the biogeochemistry of the ocean.

"The next stage of the research is to delve deeper into the question of why carbon-13-depleted carbonate rocks that formed at methane seeps seem to only be found during the later 400 million years of Earth history," says John Grotzinger, the Fletcher Jones Professor of Geology at Caltech and the principal investigator on the work described. "It is an interesting fact of the geologic record that, despite a well-preserved record of carbonates beginning 3.5 billion years ago, the first 3 billion years of Earth history does not record evidence of methane oxidation. This is a curious absence. We think it might be linked to changes in ocean chemistry through time, but more work needs to be done to explore that."

In addition to Bristow, Eiler, and Grotzinger, the other authors on the Nature paper, "A hydrothermal origin for isotopically anomalous cap dolostone cements from south China," are Magali Bonifacie, a former Caltech postdoc now at the Institut de Physique du Globe de Paris, and Arkadiusz Derkowski from the Polish Academy of Sciences in Krakow.

The work was supported by an O. K. Earl Postdoctoral Fellowship, by the National Science Foundation's Division of Earth Sciences and its Geobiology and Environmental Geochemistry program, and by CNRS-INSU (French research agency). 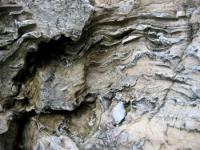 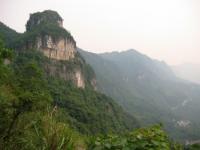 Cliffs of the Yangtze Gorge