Physicists from the Moscow Institute of Physics and Technology (MIPT) and Royal Holloway, University of London, have demonstrated an effect known as quantum wave mixing on an artificial atom. Their results, published in the journal Nature Communications, could help develop quantum electronics of an entirely new kind.

Researchers from MIPT's Laboratory of Artificial Quantum Systems led by Professor Oleg Astafiev teamed up with their British colleagues to examine a superconducting quantum system, which is physically equivalent to a single atom. Cooled to ultralow temperatures, this device emitted and absorbed single quanta of microwave radiation -- the same way that an atom interacts with photons of light.

Artificial atoms, which are at the heart of this study, are a staple of quantum optics experiments. Physicists use these systems to investigate the processes that are otherwise hard to study, such as the emission and absorption of several photons. Whereas a real atom in a mirror cavity emits light in an arbitrary direction, a superconducting system radiates in a controlled way. This enabled the authors to detect the scattering of several light quanta on an artificial atom, or wave mixing.

In the output of the system described above, the researchers observed both source radiation and electromagnetic waves resulting from its interaction with the artificial atom. The frequencies of these waves were determined by the nature of the excitation involved. This pointed to the effect of quantum wave mixing, which had not been observed in systems of this kind before.

The appeal of superconducting systems goes beyond their capacity to reveal various quantum optical effects. According to the authors of the paper, the artificial atom doubles up as a qubit -- the basic element of a quantum computer. Qubits enable computations using basic units of information different from conventional bits. Whereas a classical memory cell stores either a one or a zero, its quantum analog -- the qubit -- can be in both states at the same time due to a principle known as superposition.

"Our paper reports the findings of an experiment demonstrating unusual wave mixing effects on a single artificial atom in the gigahertz frequency range. We examined a qubit strongly coupled to the electromagnetic field in the transmission line and observed the mixing of the photonic quantum state prepared in the qubit with that of the coherent light in the transmission line," says MIPT doctoral student Aleksei Dmitriev, one of the authors of the study. The physicists point out that the observed effect offers a way of visualizing the quantum state statistics of source photons. This could find application in quantum computing, which has emerged as a hot research field in the recent years.

Quantum computers are based on the notion that a quantum object is capable of being in multiple states simultaneously. This property allows quantum algorithms to be implemented, enabling researchers to tackle problems that are virtually impossible to solve within a reasonable time frame using classical methods. Besides, quantum effects are already used in secure data transmission channels that make it impossible to intercept information without the sender and receiver knowing. 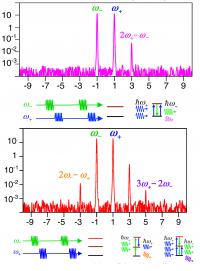