Washington, DC -- On August 17, a team of four Carnegie astronomers provided the first-ever glimpse of two neutron stars colliding, opening the door to a new era of astronomy.

Along with colleagues at UC Santa Cruz, the team used the Swope telescope at Las Campanas Observatory to discover the light produced by the merger, pinpointing the origin of a gravitational wave signal less than 11 hours after it was detected. They also obtained the earliest spectra of the collision, which may allow them to explain how many of the universe's heavy elements were created--a decades old question for astrophysicists.

Their discovery, named Swope Supernova Survey 2017a (or SSS17a), is published in a quartet of Science papers.

Neutron stars are the incredibly dense remnants left behind after supernova explosions. Theoretical astrophysicists have speculated for years about what happens when two of them merge, but until now the phenomenon had never been witnessed.

"They are as close as you can get to a black hole without actually being a black hole," explained Carnegie's Tony Piro, the Carnegie team's leader. "Just one teaspoon of a neutron star weighs as much as all the people on Earth combined," he added.

Carnegie's scientists were alerted to the event by the Laser Interferometer Gravitational-Wave Observatory (LIGO), which detects gravitational waves, ripples in space-time, caused by distant cosmic events. In February of last year, the project announced the first detection of gravitational waves caused by two black holes merging--a discovery that was awarded the Nobel Prize in Physics earlier this month.

While the LIGO black hole discovery marked an important milestone, black hole mergers do not emit light and are therefore invisible to telescopes. Neutron star mergers, however, have long been expected to produce both light and gravitational waves, so the detection of these events was eagerly anticipated.

"The ability to study the same event with both gravitational waves and light is a real revolution in astronomy," Piro said. "We can now study the universe with two completely different probes, which teach us things we could never know with only one or the other."

On August 17, LIGO sent alerts for a gravitational wave detection from colliding neutron stars to observatories around the world, firing a "starter's pistol" in the race to spot the source of the space-time ripples.

Working with David Coulter, Charles Kilpatrick, and Ryan Foley of UC Santa Cruz, the team began combing the sky at nightfall for evidence of a never-before-seen collision of neutron stars.

"We knew we only had about an hour at the beginning of the night to find the source before it set," explained Carnegie-Dunlap Fellow Maria Drout, who helped guide the discovery, "So we had to act fast."

Despite many large teams across the world working feverishly to find the event, it was the Carnegie and UC Santa Cruz astronomers--a small, young group of researchers--who made the first discovery of SSS17a.

"We saw a bright blue source of light in a nearby galaxy--the first time the glowing debris from a neutron star merger had ever been observed," recalled Josh Simon, another of the Carnegie team's leaders on this discovery. "It was definitely a thrilling moment."

Because they were the first to find the event, Simon and Carnegie-Hubble Fellow Ben Shappee had time for additional observations. They quickly set up spectrographs at the observatory's two Magellan telescopes to obtain several spectra of the merger.

No other observatories in the world made comparable observations during that first night.

Spectra separate the light from a celestial object into its component wavelengths, just as a prism spreads sunlight into the colors of the rainbow. Looking at the light in this way helps astronomers measure the speed and chemical composition of cosmic sources.

Scientists think that neutron star mergers create many heavy elements, such as gold, platinum, and uranium. But until now it has been impossible to confirm that idea.

"As we followed the glow of the explosion over the next few weeks, it showed some key characteristics ofthe radioactive decay of these heavy elements," Drout explained. "This strongly suggests that these elements were synthesized following the merger, solving a 70-year-old mystery."

"These first spectra are completely unique data and will lead to a lot of science down the road," added Shappee. "They will be extremely important for our understanding of neutron star mergers for years to come."

Authors on this suite of papers were supported by: the National Science Foundation; the Gordon & Betty Moore Foundation; the Heising-Simons Foundation; a UCSC Giving Day grant; the Alfred P. Sloan Foundation; the David and Lucile Packard Foundation; the Niels Bohr Professorship; UCMEXUS-CONACYT; the Dunlap Institute at the University of Toronto; NASA Hubble Fellowships, which are awarded by the Space Telescope Science Institute, which is operated by the Association of Universities for Research in Astronomy Inc. for NASA; FONDECYT; the Ministry of Economy, Development, and Tourism's Millennium Science Initiative through a grant awarded to The Millennium Institute of Astrophysics; the Department of Energy; and the Kavli Summer Program in Astrophysics.

These papers includes data gathered with the 6.5 meter Magellan Telescopes located at Las Campanas Observatory, Chile; data obtained from the ESO Science Archive Facility; observations made with the NASA/ESA Hubble Space Telescope, obtained from the Data Archive at the Space Telescope Science Institute, which is operated by the Association of Universities for Research in Astronomy; data from the NASA/IPAC Extragalactic Database (NED) which is operated by the Jet Propulsion Laboratory, California Institute of Technology, under contract with the National Aeronautics and Space Administration; observations collected at the European Organisation for Astronomical Research in the Southern Hemisphere, Chile as part of PESSTO (the Public ESO Spectroscopic Survey for Transient Objects Survey) through ESO programs 199.D-0143; and data obtained at the W. M. Keck Observatory, which is operated as a scientific partnership among the California Institute of Technology, the University of California and the National Aeronautics and Space Administration and was made possible by the generous financial support of the W. M. Keck Foundation. 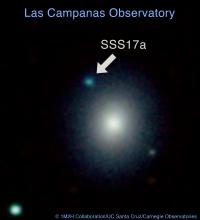