Penguins apparently can't enjoy or even detect the savory taste of the fish they eat or the sweet taste of fruit. A new analysis of the genetic evidence reported in the Cell Press journal Current Biology on February 16 suggests that the flightless, waddling birds have lost three of the five basic tastes over evolutionary time. For them, it appears, food comes in only two flavors: salty and sour.

Many other birds, such as chickens and finches, can't taste sweet things either. But they do have receptors for detecting bitter and umami (or meaty) flavors.

"Penguins eat fish, so you would guess that they need the umami receptor genes, but for some reason they don't have them," says Jianzhi "George" Zhang of the University of Michigan. "These findings are surprising and puzzling, and we do not have a good explanation for them. But we have a few ideas."

It was Zhang's colleagues in China who led him to this discovery after they realized that they couldn't find some of the taste genes in their newly sequenced genomes of Adelie and emperor penguins. Zhang took a closer look at the penguin DNA to find that all penguin species lack functional genes for the receptors of sweet, umami, and bitter tastes.

The researchers suggest that genes encoding those taste receptors may have been lost in penguins not because they weren't useful, but rather because of the extremely cold environments in which penguins live. (While some penguins have since moved to warmer climes, all penguins trace their roots to Antarctica.)

Unlike receptors for sour and salty, the taste receptors required for detecting sweet, umami, and bitter tastes are temperature sensitive. They don't work when they get really cold anyway. In other words, even if penguins had those taste receptors, the receptors wouldn't be much use to many of them.

Penguins also have a habit of swallowing their food whole, which might leave them less concerned about what their food actually tastes like. Or could it be the other way around?

"Their behavior of swallowing food whole, and their tongue structure and function, suggest that penguins need no taste perception, although it is unclear whether these traits are a cause or a consequence of their major taste loss," Zhang says. 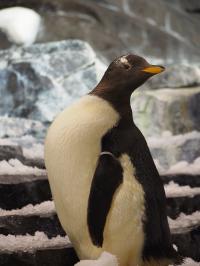 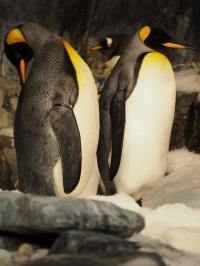