Researchers have reconstructed atmospheric carbon dioxide levels over the past 2.1 million years in the sharpest detail yet, shedding new light on its role in the earth's cycles of cooling and warming.

The study, in the June 19 issue of the journal Science, is the latest to rule out a drop in CO2 as the cause for earth's ice ages growing longer and more intense some 850,000 years ago. But it also confirms many researchers' suspicion that higher carbon dioxide levels coincided with warmer intervals during the study period.

The authors show that peak CO2 levels over the last 2.1 million years averaged only 280 parts per million; but today, CO2 is at 385 parts per million, or 38% higher. This finding means that researchers will need to look back further in time for an analog to modern day climate change.

In the study, Bärbel Hönisch, a geochemist at Lamont-Doherty Earth Observatory, and her colleagues reconstructed CO2 levels by analyzing the shells of single-celled plankton buried under the Atlantic Ocean, off the coast of Africa. By dating the shells and measuring their ratio of boron isotopes, they were able to estimate how much CO2 was in the air when the plankton were alive. This method allowed them to see further back than the precision records preserved in cores of polar ice, which go back only 800,000 years.

The planet has undergone cyclic ice ages for millions of years, but about 850,000 years ago, the cycles of ice grew longer and more intense—a shift that some scientists have attributed to falling CO2 levels. But the study found that CO2 was flat during this transition and unlikely to have triggered the change.

"Previous studies indicated that CO2 did not change much over the past 20 million years, but the resolution wasn't high enough to be definitive," said Hönisch. "This study tells us that CO2 was not the main trigger, though our data continues to suggest that greenhouse gases and global climate are intimately linked."

The timing of the ice ages is believed to be controlled mainly by the earth's orbit and tilt, which determines how much sunlight falls on each hemisphere. Two million years ago, the earth underwent an ice age every 41,000 years. But some time around 850,000 years ago, the cycle grew to 100,000 years, and ice sheets reached greater extents than they had in several million years—a change too great to be explained by orbital variation alone.

A global drawdown in CO2 is just one theory proposed for the transition. A second theory suggests that advancing glaciers in North America stripped away soil in Canada, causing thicker, longer lasting ice to build up on the remaining bedrock. A third theory challenges how the cycles are counted, and questions whether a transition happened at all.

The low carbon dioxide levels outlined by the study through the last 2.1 million years make modern day levels, caused by industrialization, seem even more anomalous, says Richard Alley, a glaciologist at Pennsylvania State University, who was not involved in the research.

"We know from looking at much older climate records that large and rapid increase in C02 in the past, (about 55 million years ago) caused large extinction in bottom-dwelling ocean creatures, and dissolved a lot of shells as the ocean became acidic," he said. "We're heading in that direction now."

The idea to approximate past carbon dioxide levels using boron, an element released by erupting volcanoes and used in household soap, was pioneered over the last decade by the paper's coauthor Gary Hemming, a researcher at Lamont-Doherty and Queens College. The study's other authors are Jerry McManus, also at Lamont; David Archer at the University of Chicago; and Mark Siddall, at the University of Bristol, UK.

Funding for the study was provided by the National Science Foundation.

Copies of the paper, "Atmospheric Carbon Dioxide Concentrations Across the Mid-Pleistocene Transition" are available from the authors or from Science at 202-326-6440 or scipak@aaas.org. 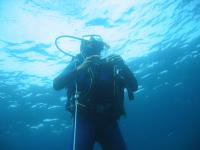