One hundred years ago on the brink of WWI, American botanists changed the course of plant science with the founding of a national publication, the American Journal of Botany. The journal not only endured through the Great War, it also continued to evolve through the wars that followed, the Great Depression, and the ever-changing arena of plant research.

Today, the AJB remains at the forefront of essential botanical research as the flagship journal of the Botanical Society of America. In celebration of its centennial anniversary, science historian Betty Smocovitis takes a look back through time at the socio-politics, personalities, institutions, educational reforms, and global events that came together around the 1914 founding of the AJB.

Tracing the journal back to its origin, Smocovitis carefully collected and examined past botanical Society meetings notes, reports, journals, and even letters of correspondence between America's most influential botanists. Her coverage of the development of the AJB follows a historical review of the BSA, for the Society's 2006 centennial, and 25 years of research into the history of botany. Published in the AJB March 2014 issue, her research pieces together crucial events that greatly influenced the study of botany in America.

According to Smocovitis, an influential player in the AJB was leading scientist F.C. Newcombe. "The man was prescient and seemed to have so much energy," she explains. "It is interesting that we don't remember him for his scientific efforts but we remember him for being the moving force behind a journal that has flourished for over 100 years."

Newcombe recognized the need for the journal as early as 1895, when a number of factors including the establishment of land grant institutions lead to a nation-wide explosion of plant research. Concerned that the spread of botanists, both geographically and academically into narrower specialties, could result in a detrimental splintering effect, he worked tirelessly to create a vehicle where botanists of all subdisciplines could share their research, exchange ideas, and collectively build upon a growing body of knowledge. After years of pulling together resources, the journal finally went public in 1914, at the very onset of WWI.

"WWI shifted the balance of institutional and intellectual power in favor of the U.S., and I don't think we have appreciated how important that war was in terms of the history of American science," says Smocovitis. The war had a profound impact on botanists by creating a pressing demand for botanical research, infusing scientists with a sense of nationalism, and launching America to lead the global stage of science.

One thing that stood out to Smocovitis was how much American botanists owed to their European progenitors, especially in Germany. "Before the rise of science education in U.S., if you wanted to get a Ph.D., which increasingly became a necessity in late 19th century science, you had to go to Germany," says Smocovitis.

Her research into the evolution of the journal throughout the 20th century also revealed several important factors that lead to today's scientific publication practices, such as the growth of anonymous peer review and multiple authorship. "As hard as that seems to understand now, there was a time when only the editor or a small group of editors read a submission," she says. "Today it is rare to see a single-authored publication, and in some areas one can see 20 to 30 names on one paper."

Another important transition was the change from private ownership to society-subsidized or sponsored journal. "Until the 1920s to 1940s, most journals were owned by people whose primary intention was to make money," says Smocovitis, "One of the things that set the AJB apart was the fact that it was owned by the Society, in part because the BSA charter members had put up some money in order to get the group started (which became a pretty healthy endowment because of wise investments.)"

The endowment was critical for the survival of the journal through the course of the 20th century. The broadness of the topics it covers continues to set AJB apart and is the direct result of the vision created by Newcombe to capture the whole variety of plant research.

Today, the AJB is internationally recognized as one of the most influential journals in biology and medicine. Never in its history, however, has the need for advances in botanical research been so paramount. Current world population growth is putting pressure on the earth's finite supply of land and water, urging botanists to develop new methods of increasing agricultural outputs while simultaneously decreasing inputs. For Smocovitis, meeting the pressing challenges of the present requires getting up close and personal with the past.

"To understand the present, you have to know something of the past. Knowing something about past struggles can really give you an appreciation of how difficult it is to come up with ideas or to generate innovation," says Smocovitis. In 1979 she was given a gift membership to the BSA by the University of Western Ontario Plant Science Department, along with a BSA Young Botanist Recognition Award. Today she works at the University of Florida and will continue to investigate and celebrate the history of science.

"I'm interested in the history of biological disciplines and how societies and journals function in the way of creating and maintaining community structure in an intellectual context. I like to study those aspects of cultures, or disciplines, that are often taken for granted or thought to be unimportant, or rendered invisible—they are all important in the way of facilitating intellectual exchange, generating innovation, as well as creating a sense of shared identity for community members."

The AJB is celebrating its centennial in 2014 through a series of "AJB Centennial Reviews," which look back at seminal papers published in the journal and look ahead to where that field of study is headed now and in future. Visit http://www.amjbot.org for each month's article(s).

The full article in the link mentioned is available as Open Access at http://www.amjbot.org/content/early/2014/02/28/ajb.1300434.full.pdf+html. After this date, reporters may contact Richard Hund at ajb@botany.org for a copy of the article.

The Botanical Society of America is a non-profit membership society with a mission to promote botany, the field of basic science dealing with the study and inquiry into the form, function, development, diversity, reproduction, evolution, and uses of plants and their interactions within the biosphere. It has published the American Journal of Botany for nearly 100 years. In 2009, the Special Libraries Association named the American Journal of Botany one of the Top 10 Most Influential Journals of the Century in the field of Biology and Medicine.

Launching a botanical journal on the verge of WWI: the politics of the AJB 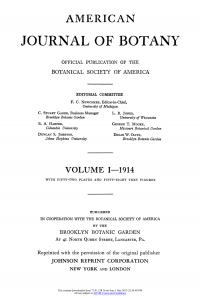