A team of Greek and German researchers has shown that the colours of sunsets painted by famous artists can be used to estimate pollution levels in the Earth's past atmosphere. In particular, the paintings reveal that ash and gas released during major volcanic eruptions scatter the different colours of sunlight, making sunsets appear more red. The results are published today in Atmospheric Chemistry and Physics, an open access journal of the European Geosciences Union (EGU).

When the Tambora volcano in Indonesia erupted in 1815, painters in Europe could see the colours of the sky changing. The volcanic ash and gas spewed into the atmosphere travelled the world and, as these aerosol particles scattered sunlight, they produced bright red and orange sunsets in Europe for up to three years after the eruption. J. M. W. Turner was one of the artists who painted the stunning sunsets during that time. Now, scientists are using his, and other great masters', paintings to retrieve information on the composition of the past atmosphere.

"Nature speaks to the hearts and souls of great artists," says lead-author Christos Zerefos, a professor of atmospheric physics at the Academy of Athens in Greece. "But we have found that, when colouring sunsets, it is the way their brains perceive greens and reds that contains important environmental information."

Zerefos and his team analysed hundreds of high-quality digital photographs of sunset paintings done between 1500 and 2000, a period including over 50 large volcanic eruptions around the globe. They were looking to find out whether the relative amounts of red and green along the horizon of each painting could provide information on the amount of aerosols in the atmosphere.

"We found that red-to-green ratios measured in the sunsets of paintings by great masters correlate well with the amount of volcanic aerosols in the atmosphere, regardless of the painters and of the school of painting," says Zerefos.

Skies more polluted by volcanic ash scatter sunlight more, so they appear more red. Similar effects are seen with mineral (desert dust) or man-made aerosols. Air with a higher amount of aerosols has a higher 'aerosol optical depth', a parameter the team calculated using the red-to-green ratios in the paintings. They then compared these values with those given by independent proxies such as ice-core and volcanic-explosivity data, and found good agreement. The results obtained validate those of the team's previous study, published in Atmospheric Chemistry and Physics in 2007.

To further support their model, the researchers asked a famous colourist to paint sunsets during and after the passage of a Saharan dust cloud over the island of Hydra in June 2010. The painter was not aware of the dust event. The scientists then compared measurements of the aerosol optical depth made by modern instruments with those estimated from the red-to-green ratios of the paintings and of digital photographs, and found that they all matched well.

Since aerosols scatter sunlight, less of it reaches the surface, leading to cooling. The Tambora eruption, the largest in recorded history, killed some 10,000 people directly and over 60,000 more due to the starvation and disease during the 'volcanic winter' that followed. Aerosol optical depth can be directly used in climate models, so having estimates for this parameter helps researchers understand how aerosols have affected the Earth's climate in the past. This, in turn, can help improve predictions of future climate change.

"We wanted to provide alternative ways of exploiting the environmental information in the past atmosphere in places where, and in centuries when, instrumental measurements were not available," concludes Zerefos.

Please mention the name of the publication (Atmospheric Chemistry and Physics) if reporting on this story and, if reporting online, include a link to the paper (TBA) or to the journal website. 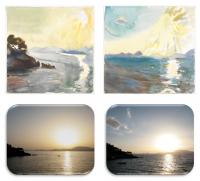