Most of us have had the experience of backing away when someone has stepped inside the bounds of our personal space. But, until now, little has been understood about the mechanisms that allow us to determine when someone is "too near" or "too far".

Using fruit flies, researchers led by Anne F. Simon of Western University's Department of Biology are gaining new insights into the need for social space and how it can be disrupted. For the first time, they have found that a neurotransmitter called dopamine is a key component in regulating social space.

That discovery may in turn have implications in better understanding people within the autism spectrum or with schizophrenia, for example.

"Each animal has a preferred social bubble, a preferred personal space," said Anne Simon. "If we can connect the dots with other animals including humans -- because we all have similar neurotransmitters -- we may gain new ways of understanding what's happening in some disorders where personal space can sometimes be an issue."

One pressing question for the next round of research is exploring how dopamine release is affected by social cues and what happens downstream of the dopaminergic neurons, to identify the circuitry that leads to the decision-making process.

"Ultimately, this research could lead us to understand a little better why some people are averse to social contact. It might also help us understand why some people who clearly want to interact don't interpret some social cues the same way others might," said Simon.

Research into fruit flies (Drosophila melanogaster) has proven valuable in understanding human behavior, neurobiology and diseases because fruit flies share much of the same genetic information.

The team included collaborators at the University of Alabama, as well as several undergraduate students who conducted research over a period of several years. They now are researchers at Yale, working at York College in Queens New York, or in post-graduate programs.

The paper is newly published in the Royal Society journal Biology Letters.

Too near, or too far? What fruit flies teach us about personal space 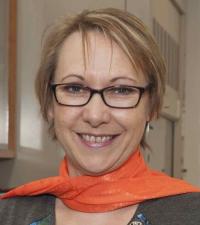