NASA reports that the Lunar Reconnaissance Orbiter, which launched June 18, is performing exceptionally well and spacecraft checkout is proceeding smoothly, so smoothly in fact that LROC was given an early, but short (two orbits) opportunity Tuesday evening to measure temperatures and background values while imaging. Since LRO is in a terminator orbit, much of the area photographed was in shadows, which is actually a good situation for performing engineering checks of camera settings, according to Robinson, with ASU's School of Earth and Space Exploration. Much to the delight of the LROC team, a few of the images captured dramatic views of the surface.

"Our first images were taken along the Moon's terminator – the dividing line between day and night – making us initially unsure of how they would turn out," says Robinson. "Because of the deep shadowing, subtle topography is exaggerated suggesting a craggy and inhospitable surface. In reality, the area is similar to the region where the Apollo 16 astronauts comfortably explored in 1972. Though these images are magnificent in their own right, the main message is that LROC is nearly ready to begin its mission."

LROC NAC: Two details from one of the first images

LRO was 70 kilometers (43.5 miles) above the lunar surface when the summed mode image was taken, resulting in a resolution of approximately 1.4-meters/pixel (34.4°S, 6.0°W). Incredible levels of detail are visible in these two (1000 pixel-by-1000 pixel) cutouts from the full image (2532 pixels-by-53,248 pixels). The NAC data shown has not been calibrated, and the pixel values were stretched to enhance contrast.

Along the terminator, there simply is not much light – the instrument is "photon-starved," resulting in suboptimal signal-to-noise ratios. Without summing, images taken in this circumstance would be underexposed. To compensate for low light levels, the pixels can effectively be made larger by summing adjacent pixels to increase the signal-to-noise ratio, making the image sharper, though with 2x lower resolution. At this resolution, features as small as three meters (9.8 feet) wide can be discerned.

The NAC image shows a starkly beautiful region a few kilometers east of Hell E crater, which is located on the floor of the ancient Imbrian-aged Deslandres impact structure in the lunar highlands south of Mare Nubium. Numerous small, secondary craters can be identified, including several small crater chains. Also identifiable are distinctive lineations made readily apparent by the extreme lighting, representing ejecta from a nearby impact. The quality of these early engineering test images gives the LROC science team confidence it can achieve its primary goals, including obtaining the data needed to support future human lunar exploration and utilization.

Once LRO finishes commissioning operations and enters its 50-kilometer x 50-kilometer (31 miles x 31 miles) mapping orbit, a maneuver currently scheduled for mid-August, the LROC NAC will take images of over 8 percent of the Moon at 50-cm/pixel.

LROC WAC: Seeing the colors of the Moon

The LROC WAC represents a very different type of imaging system than the NAC. The WAC sees the surface in seven colors, one after the other. Looking at the raw image is akin to looking through venetian blinds, which is a little confusing at first.

First you notice the five stair step-like visible bands, and then the two lower-resolution and barely visible ultraviolet bands. During processing, these seven bands are pulled apart and seven single-filter mosaics are created that can be combined in various combinations for scientific analysis.

The WAC is designed to help place the super-high-resolution NAC images into their proper geologic context, as well as discriminate color units on the surface to help geologists map rock types and identify resources. Acquired at the same time as the NAC image, more of the Deslandres region is visible because the WAC has a field of view 20 times wider than the NAC though with substantially lower resolution. For comparison, the width of the NAC image is shown as two vertical bars in the center of the image. The WAC image shown here has not been calibrated and the pixel values were stretched to enhance contrast.

LROC is scheduled for activation July 3 to formally begin its commissioning activities. The LROC Science Operations Center, part of the School of Earth and Space Exploration in the College of Liberal Arts and Sciences on ASU's Tempe campus plans to steadily release images of the lunar frontier as more data is collected and processed.

LRO will spend the next year gathering crucial data on the lunar environment that will help astronauts prepare for exploring the Moon and eventually leaving the Earth-Moon system for voyages to Mars and beyond.

The public can view LROC images online at http://www.nasa.gov/lro.

Additional information about the LROC instrument is at http://lroc.sese.asu.edu.

New focus on the moon 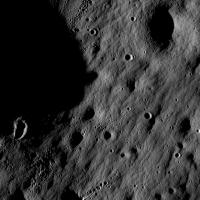 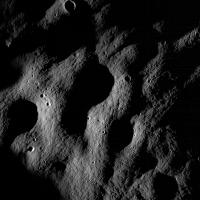