The researchers showed that hurricanes that develop over warmer oceans carry more moisture and therefore stay stronger for longer after hitting land. This means that in the future, as the world continues to warm, hurricanes are more likely to reach communities farther inland and be more destructive.

"The implications are very important, especially when considering policies that are put in place to cope with global warming," said Professor Pinaki Chakraborty, senior author of the study and head of the Fluid Mechanics Unit at the Okinawa Institute of Science and Technology Graduate University (OIST). "We know that coastal areas need to ready themselves for more intense hurricanes, but inland communities, who may not have the know-how or infrastructure to cope with such intense winds or heavy rainfall, also need to be prepared."

Many studies have shown that climate change can intensify hurricanes - known as cyclones or typhoons in other regions of the world - over the open ocean. But this is the first study to establish a clear link between a warming climate and the smaller subset of hurricanes that have made landfall.

The scientists analyzed North Atlantic hurricanes that made landfall over the past half a century. They found that during the course of the first day after landfall, hurricanes weakened almost twice as slowly now than they did 50 years ago.

"When we plotted the data, we could clearly see that the amount of time it took for a hurricane to weaken was increasing with the years. But it wasn't a straight line - it was undulating - and we found that these ups and downs matched the same ups and downs seen in sea surface temperature," said Lin Li, first author and PhD student in the OIST Fluid Mechanics Unit.

The scientists tested the link between warmer sea surface temperature and slower weakening past landfall by creating computer simulations of four different hurricanes and setting different temperatures for the surface of the sea.

Once each virtual hurricane reached category 4 strength, the scientists simulated landfall by cutting off the supply of moisture from beneath.

Li explained: "Hurricanes are heat engines, just like engines in cars. In car engines, fuel is combusted, and that heat energy is converted into mechanical work. For hurricanes, the moisture taken up from the surface of the ocean is the "fuel" that intensifies and sustains a hurricane's destructive power, with heat energy from the moisture converted into powerful winds.

"Making landfall is equivalent to stopping the fuel supply to the engine of a car. Without fuel, the car will decelerate, and without its moisture source, the hurricane will decay."

The researchers found that even though each simulated hurricane made landfall at the same intensity, the ones that developed over warmer waters took more time to weaken.

"These simulations proved what our analysis of past hurricanes had suggested: warmer oceans significantly impact the rate that hurricanes decay, even when their connection with the ocean's surface is severed. The question is - why?" said Prof. Chakraborty.

Using additional simulations, the scientists found that "stored moisture" was the missing link.

The researchers explained that when hurricanes make landfall, even though they can no longer access the ocean's supply of moisture, they still carry a stock of moisture that slowly depletes.

When the scientists created virtual hurricanes that lacked this stored moisture after hitting land, they found that the sea surface temperature no longer had any impact on the rate of decay.

"This shows that stored moisture is the key factor that gives each hurricane in the simulation its own unique identity," said Li. "Hurricanes that develop over warmer oceans can take up and store more moisture, which sustains them for longer and prevents them from weakening as quickly."

The increased level of stored moisture also makes hurricanes "wetter" - an outcome already being felt as recent hurricanes have unleashed devastatingly high volumes of rainfall on coastal and inland communities.

This research highlights the importance for climate models to carefully account for stored moisture when predicting the impact of warmer oceans on hurricanes.

"Current models of hurricane decay don't consider moisture - they just view hurricanes that have made landfall as a dry vortex that rubs against the land and is slowed down by friction. Our work shows these models are incomplete, which is why this clear signature of climate change wasn't previously captured," said Li.

The researchers now plan to study hurricane data from other regions of the world to determine whether the impact of a warming climate on hurricane decay is occurring across the globe.

Prof. Chakraborty concluded: "Overall, the implications of this work are stark. If we don't curb global warming, landfalling hurricanes will continue to weaken more slowly. Their destruction will no longer be confined to coastal areas, causing higher levels of economic damage and costing more lives." 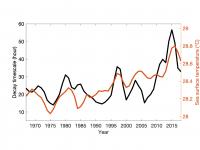 Correlation of Timescale for Weakening and Sea Surface Temperature