Tropical Depression Eight (TD8) formed around 11 p.m. EDT on Saturday, August 12 about 260 miles northeast of the southeastern Bahamas. By 5 p.m. the depression strengthened into a tropical storm and was named Gert.

At 1 p.m. EDT (1700 UTC) on Sunday, August 13, NOAA's GOES-East satellite captured a visible image of Tropical Depression 8 that showed the storm had become better organized. Bands of thunderstorms were spiraling into the center of circulation from the east and the southern quadrants of the storm. NOAA manages the GOES series of satellites. NASA/NOAA's GOES Project at NASA's Goddard Space Flight Center in Greenbelt, Maryland uses the satellite data to create imagery.

By 1:36 p.m. EDT (1736 UTC) on August 13, The Visible Infrared Imaging Radiometer Suite (VIIRS) instrument aboard NASA-NOAA's Suomi NPP satellite provided a visible look at Gert. Bands of thunderstorms wrapped around the storm from southeast to northeast.

The National Hurricane Center (NHC) noted that imagery showed that between the morning and 5 p.m. EDT "the banding features have become better established during the last several hours, and the system has become less vertically tilted."

On August 14 at 5 a.m. EDT (0900 UTC) the center of Tropical Storm Gert was located near 29.7 degrees north latitude and 72.2 degrees west longitude. That's about 475 miles (760 km) west-southwest of Bermuda. The estimated minimum central pressure is 1009 millibars. Maximum sustained winds are near 45 mph (75 kph) with higher gusts.

Gert was moving toward the north-northwest near 9 mph (15 kph) and the NHC forecasts a turn toward the north then to north-northeast. On the forecast track, Gert is expected to pass about midway between the United States east coast and Bermuda on Tuesday

The NHC said that some strengthening is forecast during the next 48 hours, and Gert could become a hurricane by Wednesday, August 16. 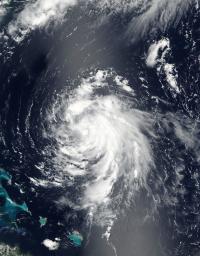