The National Science Foundation (NSF), in partnership with the National Geospatial-Intelligence Agency (NGA), is supporting development of high-resolution topographic maps of the Arctic that for the first time will provide consistent coverage of the entire globally significant region, including Alaska.

The Digital Elevation Models (DEMs), supported by a recent NSF award, will allow researchers to see in detail how warming in the region is affecting the landscape in remote areas. The maps will also allow them to compare changes over time.

The "ArcticDEM" project will use commercially available satellite data, processed using NSF-funded supercomputers and telecommunications networks, to produce elevation models--with a resolution of between 2 and 8 meters--for all Arctic landmasses north of the 60th parallel north, including all of Alaska, Greenland and the Russian Kamchatka Peninsula.

ArcticDEM is listed among a number of federal efforts that President Obama is scheduled to announce today in in Kotzebue, Alaska, in an address on new investments to combat climate change and assist remote Alaskan communities.

ArcticDEM products will be made freely available to researchers. They will allow for comparison of physical landscape features over time, enabling researchers to observe patterns of erosion, tectonic activity and other natural processes, some of which are accelerating as the Arctic warms. The completed maps will serve as a benchmark for researchers studying such features as glaciers and thermokarst--depressions that develop in the landscape due to permafrost melting--as well as effects of wildfires.

The project will begin with a mapping of Alaska and proceed to other regions in the Arctic. It is expected to create a complete map of the Arctic within the two-year term of the U.S. chairmanship of the Arctic Council, which began in April. Secretary of State John Kerry serves as the council chair.

Arctic Council member states include Canada, Denmark (including Greenland and the Faroe Islands, both autonomous parts of the Kingdom of Denmark), Finland, Iceland, Norway, the Russian Federation, Sweden, and the U.S. The council also has a Permanent Participants group of indigenous peoples' organizations that includes the Arctic Athabaskan Council; Aleut International Association; the Gwich'in Council International; the Inuit Circumpolar Council; the Russian Association of Indigenous Peoples of the North; and the Saami Council.

A $420,000 award from NSF's Division of Polar Programs, in the agency's Geosciences Division, to the Polar Geospatial Center (PGC), at the University of Minnesota-Twin Cities, and Ohio State and Cornell universities, supports the initial phase of ArcticDEM. PGC, with NSF support, has previously produced Digital Elevation Models for Specially Managed and Specially Protected Areas in the Antarctic as well as for areas of focused research interest in both polar regions.

The three universities will work with NSF-funded computing resources to produce elevation models from data provided by NGA, using algorithms originally developed by NASA for mapping planetary features and glaciers in Greenland and the Antarctic.

NSF-supported advanced computing resources that will assist in the development of the DEMs include Blue Waters at the University of Illinois at Urbana Champaign--one of the most powerful supercomputers in the world--and the Extreme Science and Engineering Discovery Environment (XSEDE), a single virtual system that enhances the productivity and broadens participation of the users of NSF-supported advanced computing and data platforms.

The ArcticDEM project will work closely with the U.S. Geological Survey and the State of Alaska to ensure that ArcticDEM is complementary to other efforts underway to improve high-quality maps of Alaska.

Polar Programs' Arctic Sciences Section supports research in the Arctic and provides operational support for the research. Its science program includes investigations directed toward the Arctic as a region of special scientific interest and as a region important to global systems. Disciplinary interests encompass the atmospheric, biological, physical, earth, ocean and social sciences. The Arctic System Science Program provides opportunities for interdisciplinary investigations of the Arctic. 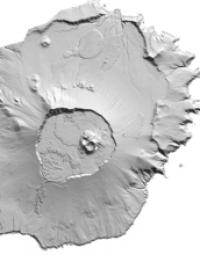