The new coating could be used to create durable, scratch-resistant lenses for eyeglasses, self-cleaning windows, improved solar panels and new medical diagnostic devices, said principal investigator Joanna Aizenberg, Ph.D., who is a Core Faculty Member at the Wyss Institute, Amy Smith Berylson Professor of Materials Science at SEAS, and a Professor of Chemistry and Chemical Biology.

The new coating builds on an award-winning technology that Aizenberg and her team pioneered called Slippery Liquid-Infused Porous Surfaces (SLIPS) -- the slipperiest synthetic surface known. The new coating is equally slippery, but much more durable and fully transparent. Together these advances solve longstanding challenges in creating commercially useful materials that repel almost everything.

SLIPS was inspired by the slick strategy of the carnivorous pitcher plant, which lures insects onto the ultraslippery surface of its leaves, where they slide to their doom. Unlike earlier water-repelling materials, SLIPS repels oil and sticky liquids like honey, and it resists ice formation and bacterial biofilms as well.

While SLIPS was an important advance, it was also "a proof of principle" – the first step toward a commercially valuable technology, said lead author Nicolas Vogel, Ph.D., a postdoctoral fellow in applied physics at Harvard SEAS.

"SLIPS repels both oily and aqueous liquids but it's expensive to make and not transparent," Vogel said.

The original SLIPS materials also need to be fastened somehow to existing surfaces, which is often not easy.

"It would be easier to take the existing surface and treat it in a certain way to make it slippery," Vogel explained.

Vogel, Aizenberg, and their colleagues sought to develop a coating that accomplishes this and works as SLIPS does. SLIPS's thin layer of liquid lubricant allows liquids to flow easily over the surface, much as a thin layer of water in an ice rink helps an ice skater glide.

To create a SLIPS-like coating, the researchers corral a collection of tiny spherical particles of polystyrene, the main ingredient of Styrofoam, on a flat glass surface like a collection of Ping-Pong balls. They pour liquid glass on them until the balls are more than half buried in glass. After the glass solidifies, they burn away the beads, leaving a network of craters that resembles a honeycomb. They then coat that honeycomb with the same liquid lubricant used in SLIPS to create a tough but slippery coating.

"The honeycomb structure is what confers the mechanical stability to the new coating," said Aizenberg.

By adjusting the width of the honeycomb cells to make them much smaller in diameter than the wavelength of visible light, the researchers kept the coating from reflecting light. This made a glass slide with the coating completely transparent.

These coated glass slides repelled a variety of liquids, just as SLIPS does, including water, octane, wine, olive oil and ketchup. And, like SLIPS, the coating reduced the adhesion of ice to a glass slide by 99 percent. Keeping materials frost-free is important because adhered ice can take down power lines, decrease the energy efficiency of cooling systems, delay airplanes and lead buildings to collapse.

Importantly, the honeycomb structure of the SLIPS coating on the glass slides confers unmatched mechanical robustness. It withstood damage and remained slippery after various treatments that can scratch and compromise ordinary glass surfaces and other popular liquid-repellent materials, including touching, peeling off a piece of tape, wiping with a tissue.

"We set ourselves a challenging goal: to design a versatile coating that's as good as SLIPS but much easier to apply, transparent, and much tougher -- and that is what we managed," Aizenberg said.

The team is now honing its method to better coat curved pieces of glass as well as clear plastics such as Plexiglas, and to adapt the method for the rigors of manufacturing.

"Joanna's new SLIPS coating reveals the power of following Nature's lead in developing new technologies," said Don Ingber, M.D., Ph.D., the Wyss Institute's Founding Director. "We are excited about the range of applications that could use this innovative coating." Ingber is also the Judah Folkman Professor of Vascular Biology at Harvard Medical School and Boston Children's Hospital, and Professor of Bioengineering at Harvard SEAS.

This work was funded by the Advanced Research Projects Agency-Energy (ARPA-E), the Air Force Office of Scientific Research, and the Wyss Institute. Nicolas Vogel received funding from the Leopoldina Fellowship program. In addition to Vogel and Aizenberg, the research team included: Rebecca A. Belisle, a former Wyss research assistant who is now a graduate student in Materials Science and Engineering at Stanford University; Benjamin Hatton, Ph.D., formerly a Technology Development fellow at the the Wyss Institute and a research appointee at SEAS who is now an assistant professor of materials science and engineering at the University of Toronto; and Tak-Sing Wong, Ph.D., a former postdoctoral research fellow at the Wyss Institute who is now an Assistant Professor of Mechanical and Nuclear Engineering at Penn State University.

About the Wyss Institute for Biologically Inspired Engineering at Harvard University

About the Harvard School of Engineering and Applied Sciences

Harvard School of Engineering and Applied Sciences (SEAS) serves as the connector and integrator of Harvard's teaching and research efforts in engineering, applied sciences, and technology. Through collaboration with researchers from all parts of Harvard, other universities, and corporate and foundational partners, we bring discovery and innovation directly to bear on improving human life and society. For more information, visit: http://seas.harvard.edu 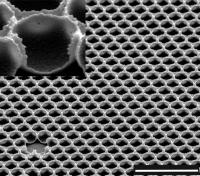