Scientists at the University of Copenhagen have discovered that Vitamin D is crucial to activating our immune defenses and that without sufficient intake of the vitamin, the killer cells of the immune system – T cells - will not be able to react to and fight off serious infections in the body.

For T cells to detect and kill foreign pathogens such as clumps of bacteria or viruses, the cells must first be 'triggered' into action and 'transform' from inactive and harmless immune cells into killer cells that are primed to seek out and destroy all traces of a foreign pathogen.

The researchers found that the T cells rely on vitamin D in order to activate and they would remain dormant, 'naïve' to the possibility of threat if vitamin D is lacking in the blood.

In order for the specialized immune cells (T cells) to protect the body from dangerous viruses or bacteria, the T cells must first be exposed to traces of the foreign pathogen. This occurs when they are presented by other immune cells in the body (known as macrophages) with suspicious 'cell fragments' or 'traces' of the pathogen. The T cells then bind to the fragment and divide and multiply into hundreds of identical cells that are all focused on the same pathogen type. The sequence of chemical changes that the T cells undergo enables them to both be 'sensitized to' and able to deliver a targeted immune response.

Professor Carsten Geisler from the Department of International Health, Immunology and Microbiology explains that "when a T cell is exposed to a foreign pathogen, it extends a signaling device or 'antenna' known as a vitamin D receptor, with which it searches for vitamin D. This means that the T cell must have vitamin D or activation of the cell will cease. If the T cells cannot find enough vitamin D in the blood, they won't even begin to mobilize. "

Activating and Deactivating the Immune System

For the research team, identifying the role of vitamin D in the activation of T cells has been a major breakthrough. "Scientists have known for a long time that vitamin D is important for calcium absorption and the vitamin has also been implicated in diseases such as cancer and multiple sclerosis, but what we didn't realize is how crucial vitamin D is for actually activating the immune system – which we know now. "

The discovery, the scientists believe, provides much needed information about the immune system and will help them regulate the immune response. This is important not only in fighting disease but also in dealing with anti-immune reactions of the body and the rejection of transplanted organs. Active T cells multiply at an explosive rate and can create an inflammatory environment with serious consequences for the body. After organ transplants, e.g. T cells can attack the donor organ as a "foreign invader". In autoimmune disease, hypersensitive T cells mistake fragments of the body's own cells for foreign pathogens, leading to the body launching an attack upon itself.

The research team was also able to track the biochemical sequence of the transformation of an inactive T cell to an active cell, and thus would be able to intervene at several points to modulate the immune response. Inactive or 'naïve' T cells crucially contain neither the vitamin D receptor nor a specific molecule (PLC-gamma1) that would enable the cell to deliver an antigen specific response.

The findings, continues Professor Geisler "could help us to combat infectious diseases and global epidemics. They will be of particular use when developing new vaccines, which work precisely on the basis of both training our immune systems to react and suppressing the body's natural defenses in situations where this is important – as is the case with organ transplants and autoimmune disease."

Most Vitamin D is produced as a natural byproduct of the skin's exposure to sunlight. It can also be found in fish liver oil, eggs and fatty fish such as salmon, herring and mackerel or taken as a dietary supplement. No definitive studies have been carried out for the optimal daily dosage of vitamin D but as a large proportion of the population have very low concentrations of vitamin D in the blood, a number of experts recommend between 25-50mg micrograms a day.

Press coverage of the release is embargoed until this date and time. 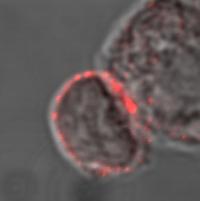