Decisions made in the next decade will determine whether Antarctica suffers dramatic changes that contribute to a metre of global sea level rise.

In a new study, scientists argue that time is running out to save this unique ecosystem, and that if the right decisions are not made to preserve Antarctica in the next ten years then the consequences will be felt around the world.

Their results, published today in Nature, assess the state of Antarctica in 2070 under two scenarios, which represent the opposite extremes of action and inaction on greenhouse gas emissions and environmental protection.

Antarctica is affected by many global changes, but in turn it also affects the global environment. For example, one of the largest uncertainties in future sea-level rise predictions is how the Antarctic ice sheet reacts to human-induced global warming.

The Southern Ocean around Antarctica also absorbs a large amount of carbon dioxide (CO2) from the atmosphere, slowing the rate of climate change. However, it can only absorb so much CO2, and absorbing excess amounts increases the acidity of the water, harming marine life.

To see what the future might hold, an international team of researchers, including scientists at Imperial College London, has predicted what would happen under two future scenarios. Firstly, if emissions rise unabated and regulation in Antarctica fails to keep up with changes; and secondly if emissions are significantly reduced through regulations informed by research.

The authors argue that which scenario plays out depends significantly on choices made over the next decade, on both climate-change mitigation plans and on environmental regulation. For example, there is currently a moratorium on mining in Antarctica, but as global population rises this accord could be threatened.

Co-author Professor Martin Siegert, from the Grantham Institute - Climate Change and the Environment at Imperial, said: "Some of the changes Antarctica will face are already irreversible, such as the loss of some ice shelves, but there is a lot we can prevent or reverse.

"To avoid the worst impacts, we will need strong international cooperation and effective regulation backed by rigorous science. This will rely on governments recognising that Antarctica is intimately coupled to the rest of the Earth system, and damage there will cause problems everywhere."

Lead author Dr Steve Rintoul, of the Centre for Southern Hemisphere Oceans Research and Antarctic Climate and Ecosystems Cooperative Research Centre in Australia, said: "Greenhouse gas emissions must start decreasing in the coming decade to have a realistic prospect of following the low emissions narrative and so avoid global impacts associated with change in Antarctica, such as substantial sea level rise."

Two extremes: on the road to collapse or impacts minimised

Under the high emissions and low regulations narrative, Antarctica and the Southern Ocean undergo widespread and rapid change, with global consequences.

Under the low emissions and tight regulations narrative, reduction of greenhouse gas emissions and implementation of effective policy helps to minimise change in Antarctica, which in 2070 looks much like it did in the early decades of the century.

Professor Siegert said: "If the political landscape of a future Antarctica is more concerned with rivalry, and how each country can get the most out of the continent and its oceans, then all protections could be overturned.

"However, if we recognise the importance of Antarctica in the global environment, then there is the potential for international co-operation that uses evidence to enact changes that avoid 'tipping points' - boundaries that once crossed, would cause runaway change, such as the collapse of the West Antarctic Ice Sheet."

More detail on the impacts: environmental

In the worst-case scenario, floating ice shelves that hold back ice on land would collapse, enhancing flow of ice from land to the sea. Antarctica would contribute more than 25 cm to a total global sea level rise of more than a metre. This could lead eventually to the collapse of the entire West Antarctic Ice Sheet, and around 3.5 m of sea level rise.

Currently, ice loss at the margins of Antarctica is compensated by increased accumulation of ice through snowfall at the centre of the continent. By 2070, however, this balance would no longer be possible, and the continent as a whole would be losing ice mass.

The extent of summer sea ice would also reduce by 50%. This, combined with ice shelf collapses and grounded ice losses, would lead to a freshening of the local ocean surface, which would change ocean currents.

The ocean itself would also warm up to 2?C from today's levels, reducing its ability to absorb CO2 and causing global warming to occur faster. The acidity of the oceans would also reach a point where the shells of certain sea creatures are unable to form properly.

In contrast, under the best-case scenario, Antarctica’s contribution to sea level would only be about 6cm in a global rise of around half a metre, due to instabilities in the West Antarctic Ice Sheet that have been irreversible since 2010.

However, many of the other impacts in the region would be significantly less, and in some cases reversed. The ocean would not experience significant freshening because of reduced sea ice loss and ice shelf breakup, leaving circulation patterns intact.

The ocean would also warm less, by only around 0.7?C, meaning it would retain its ability to absorb CO2 and the acidity would not be at harmful levels.

More detail on the impacts: human

As well as the physical changes to Antarctica, the analysis also looked at the impacts on ecosystems and direct human impacts, such as mining and tourism. These factors depend strongly on how much international agreement and cooperation there is, particularly in creating and enforcing well-informed regulations.

The authors say that this means research programs need to be supported to make evidence-based decisions on the best way forward. If these are maintained into 2070, and the international community acts together on the recommendations, then worst impacts can be avoided.

For example, without strict limits on fishing, stocks of regularly caught species will decline dramatically. As a result, new species will be fished, and these will also be diminished quickly if regulation does not catch up. There will also be knock-on effects on the populations of seabirds and mammals, changing the entire structure of the ecosystem.

There are resources in Antarctica that could be mined, such as coal and iron ore, but current international agreements forbid their extraction. However, by 2070 governments with logistical presence and capability on the continent could be more interested in dividing up the resources, rather than saving the entire environment.

With less ice on land and sea, tourism could also reach unsustainable levels - for example with the introduction of permanent hotels. Tourists will bring and spread new species if there is not appropriate control, and the analysis predicts that some of the world's most invasive species would take hold by 2070 in this case.

How to save Antarctica (and the rest of Earth too) 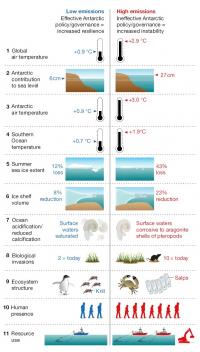