Among the intriguing things Professor Eugenia Etkina could put on a resume is the fact that she can demonstrate Newton's Laws of Motion on Rollerblades. As one of the creators of a Web site known as the Rutgers Physics Teaching Technology Resource, Etkina is committed to "increasing the excitement of learning physics."

Because of the Web site's innovative approach, which involves among other techniques the use of slow-motion video to help students grasp physics concepts through the presentation of everyday occurrences, the Rutgers Physics Teaching Technology Resource has been selected to receive the Science Prize for Online Resources in Education (SPORE).

"The Web site not only helps students understand physics as it appears in real life," says Melissa McCartney, a Science editorial fellow, "but it also gives students the opportunity to flex their muscles as scientists, deciding what information is important, what can be ignored, and how to account for variability of natural phenomena."

The Science Prize for Online Resources in Education (SPORE) was developed to spotlight the best online materials in science education. The acronym SPORE connotes a reproductive element adapted to develop, often in less-than-ideal conditions, into something new—suggesting that these winning projects may be the seed of significant progress in science education, despite considerable challenges to educational innovation. Science publishes an article by each recipient of the award, which explains the winning project. The article about the Rutgers Physics Teaching Technology Resource will be published on October 29.

"We want to recognize innovators in science education," says Bruce Alberts, editor-in-chief of Science. "At the same time, this competition will promote those Web sites with the most potential to benefit science students and teachers. The publication of an article in Science on each winning site will help guide everyone to important online resources, thereby promoting science literacy."

Web site creator Etkina grew up in Moscow in a family of physicists. By the time she was in high school, despite having toyed with the idea of being a writer, Etkina decided to be a physics teacher. After finishing school, she taught for 13 years in an educational system that required students from middle-school to high-school age to take physics classes for five years.

During those years of teaching, the principal at Etkina's school encouraged her and her colleagues not to lecture to their classes, urging them instead to provide situations for the students to learn on their own. Experimenting with this, Etkina says she quickly learned that "if I could create assignments where they were building their own knowledge, then they would remember what they had learned." This became a fundamental theme in Etkina's later work.

After moving to the United States and taking a job in the physics department at Rutgers, Etkina soon moved over to the university's Graduate School of Education. In time, she had created one of the largest physics teacher preparation programs in the country. She says the need for such programs is great, with few physics teachers possessing even a minor in physics and even fewer having taken a single course in how to teach physics. Despite such sketchy preparation, there are good physics teachers, Etkina says, but the traditional method of teaching the subject remains lecturing and presenting equations, a method no more effective in teaching physics than it would be teaching someone to drive a car, play tennis, or play music, Etkina says.

Etkina's main collaborator on the Web site is David Brookes, an assistant professor of physics at Florida International University. Formerly a graduate student of Etkina's, he is responsible for having digitized the videos to fit on the site, plus he developed software so that the site can be constantly updated and edited. "It's like a living organism," says Etkina.

Etkina and her colleagues worked hard to develop the Web site so it would instill the kind of intellectual approach to the world that physicists themselves have, a way of thinking and exploring that Etkina values very highly.

"People who think like physicists keep wondering about nature. They keep questioning. Ultimately, they start asking questions about the decisions people make around them. The world would be very different if everyone thought like a physicist."

Etkina is careful to point out that hers is not the only good approach to teaching physics, saying there are "many, many more. If more people were adopting those approaches, instead of physics being a process of plugging numbers into equations, it would be this exciting process of discovery."

Meanwhile, the Rutgers Physics Teaching Technology Resource is hugely popular all over the world in schools ranging from middle schools to universities. Some institutions even rely on it for all of their physics labs.

In some cases, students say the Web site's videos illustrate concepts in ways that hit home like no other explanation. An example involves Brookes hitting a bowling ball so that it travels in a circular path. Others of course involve Rollerblades. Etkina says that the bigger the experimental equipment, and that includes using the human body as an object, the better students remember the lesson.

Next, Etkina would like to extend her teaching method and the Web site to chemistry and biology, although she acknowledges that might require that each of her days contain 36 hours.

In the meantime, winning a SPORE award will bring added visibility to the site, Etkina predicts.

"If more teachers see that physics can be taught this way, more students can say, 'I can be a physicist.'" 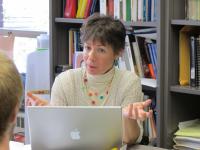