Antibiotics may be a good choice for some, but not all, patients with appendicitis, according to results from the Comparing Outcomes of antibiotic Drugs and Appendectomy (CODA) Trial reported today in the New England Journal of Medicine.

"About three in 10 patients in the antibiotic group ultimately underwent an appendectomy within 90 days," said Dr. David Flum, co-principal investigator and professor and associate chair of surgery at the University of Washington School of Medicine. "There were advantages and disadvantages to each treatment, and patients will value these differently based on their unique characteristics, concerns, and perspectives."

CODA is the largest-ever clinical randomized trial of appendicitis treatment. At hospitals across 14 states, 1,552 patients with appendicitis consented to participate and were randomized to receive antibiotics first or undergo an appendectomy.

Nearly half of the antibiotics group were discharged from the emergency department and avoided hospitalization for their initial treatment, but the overall time spent in the hospital was similar between both groups.

"People treated with antibiotics more often returned to the emergency department, but missed less time from work and school," said Bonnie Bizzell, chair of the CODA patient advisory board. "Information like this can be important for individuals as they consider the best treatment option for their unique circumstance. The CODA trial is really the first of its kind to capture these measures for shared decision-making about appendicitis."

"When we compared the outcomes of people treated with antibiotics alone or surgery to remove the appendix, we found that people receiving either treatment felt well at 30 days," said Dr. David Talan, co-principal investigator and professor of emergency medicine and medicine/infectious diseases at the David Geffen School of Medicine at UCLA. "In terms of overall health status, antibiotics were no worse than surgery and allowed most people to avoid an operation in the short term," Talan said.

In CODA, initial treatment with antibiotics appeared to create higher risk for patients with an appendicolith - a calcified deposit within the appendix. This x-ray finding occurs in about one-fourth of patients with acute appendicitis and was associated with more complications and a 4-in-10 chance of appendectomy by 90 days.

Funded by the Patient-Centered Outcomes Research Institute (PCORI), the CODA study was conducted by a collaborative network of 25 hospitals. A collaborative composed of site clinicians, patient advisors, and other stakeholders will continue to share trial results as ongoing follow-up with participants is completed.

Dr. Giana Davidson, an associate professor of surgery at the UW School of Medicine, directed the clinical coordination of U.S. sites participating in the CODA trial. She is presenting the study findings today at the Clinical Congress of the American College of Surgeons.

Interview requests for Bonnie Bizzell should be directed to Brian Donohue at the UW School of Medicine. 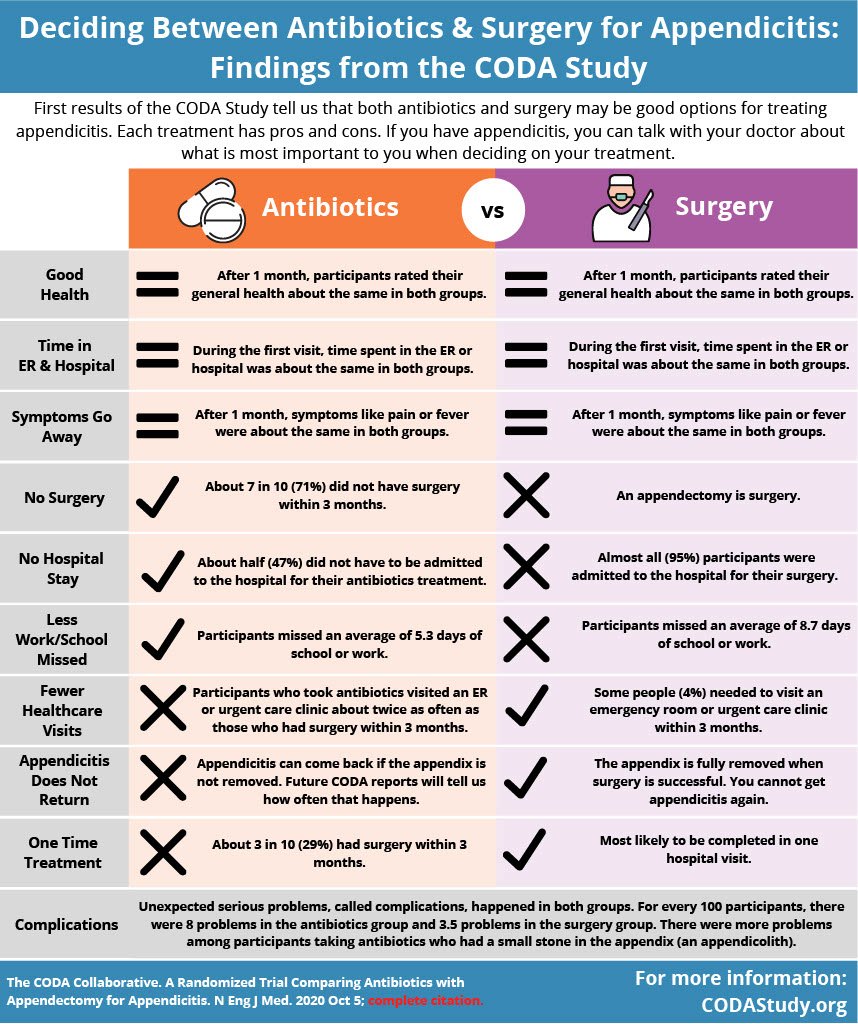 Infographic: Deciding between surgery and antibiotics for appendicitis