December 27, 2017: This press release is based on a publication in the journal PLOS Neglected Tropical Diseases, which is co-authored by a scientist now working at the University of Bonn. He previously worked at the International Centre of Insect Physiology and Ecology in Nairobi, Kenya, where the work described in the publication took place. We wish to clarify this in order to avoid the impression that the study has been carried out at the University of Bonn.

Further information on the study and on research in this area can be obtained from the International Centre of Insect Physiology and Ecology, http://www.icipe.org.

In Africa, tsetse flies transfer the sleeping sickness also to cattle. This leads to huge losses in milk, meat and manpower. The damage in Africa is estimated to be about 4.6 billion US dollars each year. Prof. Dr. Christian Borgemeister from the Center for Development Research (ZEF) at the University of Bonn and his colleagues from Kenya and the UK have developed an innovative way of preventing the disease. The scientists took advantage of the fact that tsetse flies avoid waterbucks, a widespread antelope species in Africa. The scientists imitated the smell of these antelopes. If the cattle were equipped with collars containing the defense agent, more than 80 percent of the cattle were spared from the feared infection. This research results are presented in PLOS Neglected Tropical Diseases.

Tsetse flies are widespread in Africa. They feed on blood and can transfer the dreaded sleeping sickness. The infection can be lethal and damages the nervous system and, in the final stage, causes a dozy state, which gave the disease its name. Many people in tropical Africa are directly endangered, but the transfer to cattle also has drastic consequences for agriculture by reducing the production of milk, meat and labor.

In the fight against sleeping sickness, Prof. Dr. Christian Borgemeister of the Center for Development Research (ZEF) of the University of Bonn and a team of researchers from the International Center of Insect Physiology and Ecology (icipe), the Interafrican Bureau for Animal Resources (both in Kenya) and Rothamsted Research, Harpenden (Great Britain) pursued a new approach. The tsetse flies avoid waterbucks, an African antelope species, because they find the smell of the animals repellent.

The international team of scientists first isolated, identified and synthesized the waterbuck's repellents in the laboratory. They then filled tiny amounts of the tsetse fly-repellent substance into plastic containers that were tied to the cattle with a collar. From then on the cattle exhaled the smell of the unloved waterbucks - as in the famous wolf in sheep's clothing the tsetse flies were deceived by the "antelope perfume".

This innovative method for disease prevention was tested in a large two-year field trial in Kenya. For the experiment, 120 Maasai herders provided more than 1,100 of their cattle. Compared to unprotected cattle, the disease rates of the animals wearing the collar treated with the virus were reduced by more than 80 per cent. In general, the animals with the protective collar were healthier, heavier, gave more milk, plowed more land and achieved significantly higher sales on regional markets.

"All of this contributed to a significant improvement in the food security and household income of the pastoralist families involved," says Borgemeister. Compared to the animal medicines that are usually used to treat the disease, the collar method is significantly cheaper and thus more economical, tells the researchers. In addition, the new technology is very popular among the Maasai herders. Around 99 per cent of the shepherds would like to use the collars.

"This method, successfully tested in practice, represents a significant advance for the food security of many pastoralists and cattle farmers in Africa," says Borgemeister. Since the collars are easy to apply with the antidote and do not entail high costs, the approach is particularly attractive and promising. 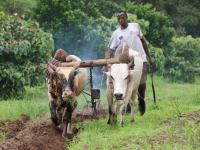 With the Traditional Method