Sergey Leshchinskiy, paleontologist, head of TSU's Laboratory of Mesozoic and Cenozoic Continental Ecosystems, has studied the remains of Yakut mammoths collected on one of the largest locations in the world of mammoth fauna, Berelyokh. His study showed that almost half of the bones of these ancient mammals have signs of serious pathologies typical for the human skeletal system.

According to the scientist, the remains of mammoths that lived about 12,000 -13,000 years ago (ca BP) in the area of modern Yakutia are perfectly preserved. Bones carried to the Berelyokh site were covered by sediments, and this saved them from weathering and damage by predators. In conditions of permafrost, the decomposition of tissues is slow, so even after millennia, the cartilage on some bones survived.

During the work with the collection, it was found that 42% of the samples showed signs of diseases of the skeletal system. Among them there are two pathologies that no one in the world had ever detected on the remains of this species.

One of the diseases doctors call "articular mouse", or "rice grain". It is a fragment of bone or cartilaginous tissue that is located freely in the joint cavity, -- explains Sergei Leschinskiy. -- Quite often this pathology is observed in humans. When such a piece falls into the articular cavity, severe pain occurs. This indicates a serious disease, for example, subchondral bone necrosis. An animal with such an ailment was restricted in movement and often became an easy target for predators.

Another anomaly, described for the first time in mammoths, is the openness of the transverse apertures of the cervical vertebrae, in which blood vessels and nerve plexuses are normally located. There are several vertebrae with such a deviation, and it is obvious that they belong to different individuals. However, in most cases, the mammoths have signs of destructive changes, osteoporosis, osteolysis, osteofibrosis, osteomalacia, articular diseases, and other diseases caused by metabolic disorders by a lack or excess of vital macro and micro elements.

These results confirm the hypothesis of TSU paleontologists that the cause of mass extinction of mammoths was the geochemical stress that arose due to mineral starvation or due to major ecological changes on the planet.

The results of the research are available in one of the prestigious journals in quaternary sciences, from the Elsevier publishing house -- Quaternary International.

Mammoths suffered from diseases that are typical for people 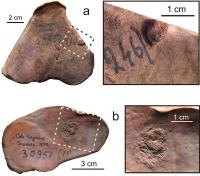