BUFFALO, N.Y. -- As cells age and stop dividing, their fat content changes, along with the way they produce and break down fat and other molecules classified as lipids, according to a new University at Buffalo study.

"Traditionally, lipids have been thought of as structural components: They store energy and form the membranes of cells," says G. Ekin Atilla-Gokcumen, PhD, an assistant professor of chemistry in UB's College of Arts and Sciences. "Our results add to evidence that lipids may actually play a much more active role in the body, in this case, in the process of replicative senescence, which is linked to cellular aging. This is a new, emerging field of study."

By providing broad insights into the connection between lipids and cellular aging, the findings open the door for additional research that could one day support the development of lipid-based approaches to preventing cell death or hastening it in cancerous tumors.

How lipids change as cells age

Lipids are a class of organic molecules that include fats, waxes and sterols like cholesterol.

To study the role of these molecules in cellular aging, the researchers grew human fibroblast cells in the lab over four months -- long enough that some cells stopped dividing, a process known as replicative senescence.

When the researchers compared the lipid content of young cells to older cells, some interesting trends emerged.

In senescent cells, 19 different triacylglycerols, a specific type of lipid, accumulated in substantial amounts. These increases occurred in both lung and foreskin fibroblasts, showing that such changes are not limited to a single variety of cell.

To glean more information about the function of lipids in cellular senescence and aging, the scientists used a technique called transcriptomics to determine how cellular activity associated with lipid-related genes changed as cells grew older.

The analysis provided yet more evidence that the lipidome -- the collection of all lipids within cells -- is highly regulated during senescence. In cells that had stopped dividing, the behavior of dozens of genes tied to lipid-related processes, such as the synthesis, break down and transport of lipids, changed significantly compared to that of all genes within the cells. Certain lipid-linked genes became more actively expressed, meaning that they were used more often to create proteins, while others became less so.

"A lot of research has been done on how proteins contribute to cellular processes such as cellular senescence, but the role of lipids is much less clear," Gokcumen says. "Work in this area has been very limited, and our study provides a huge amount of data about the lipidome and lipid-linked genes that other researchers can use to further understand how lipids are involved in cellular aging."

The research did not draw direct conclusions about why levels of the 19 triacylglycerols rose during cellular aging, but the project did reveal clues as to why this may have happened, Atilla-Gokcumen and Gokcumen say.

Atilla-Gokcumen and Gokcumen hypothesize that the triacylglycerols in question may help the body cope with oxidative stress, which occurs when dangerous molecules called reactive oxygen species roam the body and cause damage to cells.

The study found that during cellular senescence, the accumulation of triacylglycerols corresponded with a significant increase in the levels of genes involved in responding to oxidative stress.

Furthermore, the 19 triacylglycerols identified had chemical properties that could help protect cells from damage caused by oxidative stress. All had a remarkably similar structure, featuring long chains of fatty acids, including at least one polyunsaturated fatty acyl (PUFA) chain.

This matters because PUFA chains can bind with reactive species, taking them out of circulation. And because triacylglycerols are stored within solitary lipid droplets inside cells, PUFA triacylglycerols may be able to carry out the important duty of neutralizing the dangerous intruders without harming other components of a cell.

As cells age, the fat content within them shifts 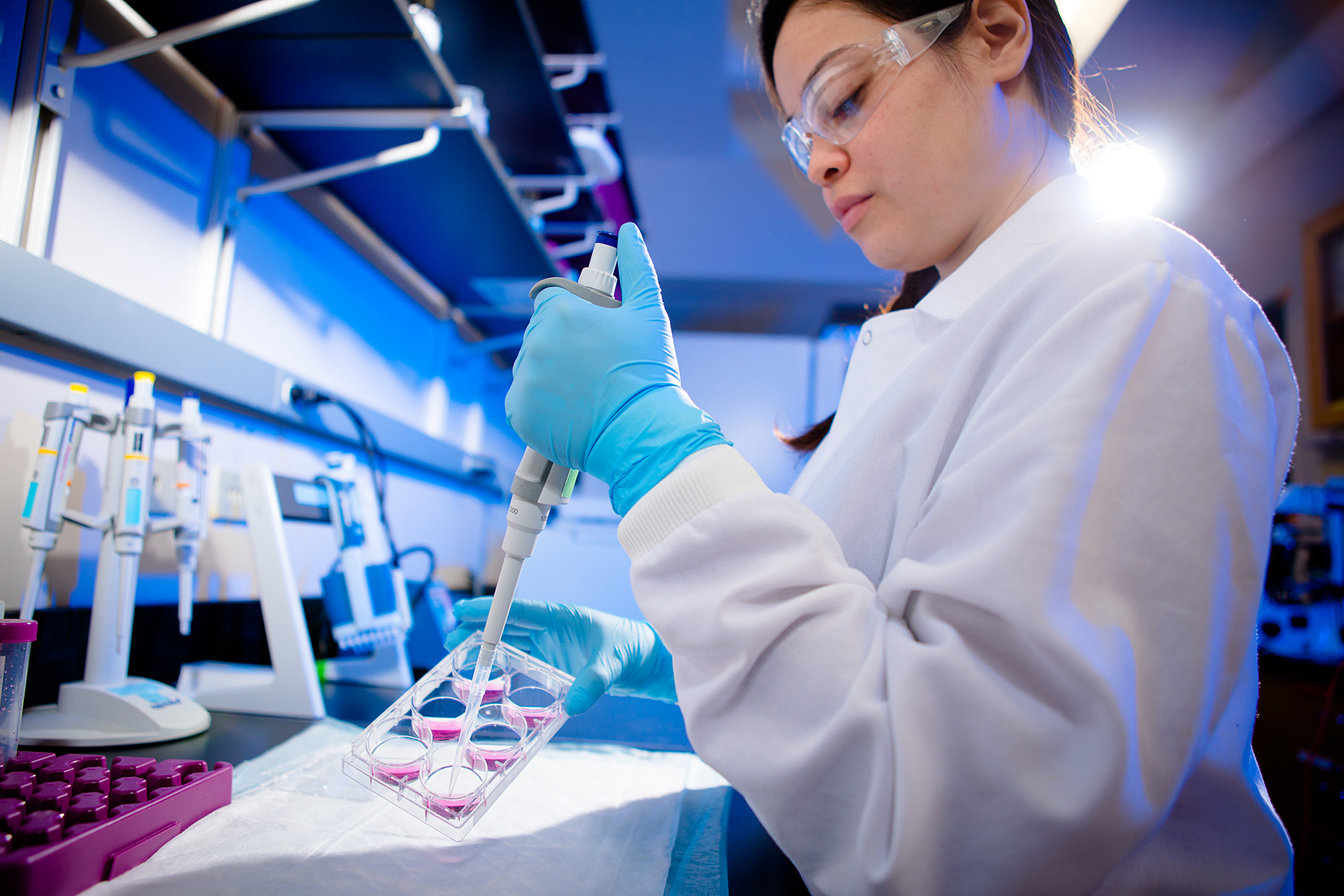 Pipetting in the Lab of G. Ekin Atilla-Gokcumen