In 1898, Lieutenant Colonel John Patterson shot two man-eating lions that killed dozens of workers building a railroad in Tsavo, Kenya. He wrote, "I have a very vivid recollection of one particular night when the brutes seized a man from the railway station and brought him close to my camp to devour. I could plainly hear them crunching the bones, and the sound of their dreadful purring filled the air and rang in my ears for days afterwards." But new research into those lions' teeth suggests that he might have been a little flowery with his words: the man-eaters' teeth don't show the wear and tear you'd expect if they'd been chowing down on bones.

"It's hard to fathom the motivations of animals that lived over a hundred years ago, but scientific specimens allow us to do just that," says Bruce Patterson, a co-author of the study in Scientific Reports and MacArthur Curator of Mammals at The Field Museum. (And no, no relation to the Colonel Patterson who shot the lions. The lions themselves have a claim to fame, though--their story was popularized in three Hollywood movies, including the 1996 film The Ghost and the Darkness.) "Since The Field Museum preserves these lions' remains, we can study them using techniques that would have been unimaginable a hundred years ago."

In this study, lead author Larisa DeSantis of Vanderbilt University and Patterson investigated a hypothesis suggesting that the Tsavo man-eaters turned to human prey because they couldn't find other food to eat. The region was in the midst of a two-year drought at the end of a viral epidemic that ravaged local wildlife. Some scientists have speculated that prey shortages may have driven the lions to man-eating. The lions' teeth could be the key to determining whether this hypothesis was true. If the teeth showed lots of wear and tear from crunching bones, that would be a sign that pickings were slim enough that the lions had to eat entire carcasses instead of just the fresh meat.

DeSantis used dental tools to create molds of the lions' teeth, made casts of them, then examined the microscopic wear (termed dental microwear) on the teeth in 3D, much like a topographic map, and used fractal geometric methods to characterize them. But instead of seeing heavily worn tooth surfaces expected from a bone-heavy diet, the researchers saw the opposite.

"The microscopic wear of the lions' teeth were less complex and 'chewed up' than you'd see in an animal that eats lots of bone, like a hyena. Instead, their dental microwear is similar to what you'd see in a zoo lion," says DeSantis. Less complex dental microwear contradict the notion that the lions were so hard up for food that they had to eat humans, including their bones. So why then did these lions eat people?

While the dental microwear didn't show bone-crunching wear and tear, the teeth were far from pristine. The Tsavo man-eater who did the most man-eating, as established through chemical analysis of the lions' bones and fur in a previous study, had severe dental disease. It had a root-tip abscess in one of its canines-- a painful infection at the root of the tooth that would have made normal hunting impossible. "Lions normally use their jaws to grab prey like zebras and wildebeests and suffocate them," explains Patterson. "This lion would have been challenged to subdue and kill large, struggling prey, and humans are so much easier to catch."

It's still not clear why the lions weren't consuming the bones of their human prey. It could be that dental disease rendered them physically unable to do so, or perhaps it's because the human victims' remains were reclaimed at dawn by their fellow workers before the lions could further scavenge the carcasses. Either way, it's likely that dental disease played a major role in this unusual spate of man-eating.

"It's remarkably rare for lions to attack people, but it's catastrophic when it happens," says Patterson. "When a big, dangerous predator becomes incapacitated, there's a real danger for this kind of behavior--no animal will let itself starve to death if there's another option."

This paper marks the latest development in a century-long quest to figure out what led the Tsavo lions to kill humans. "There's an endless fascination with these lions. The Tsavo man-eaters were the only lions ever mentioned by the British parliament, when the British were inconvenienced by construction delays. The lions stopped the British Empire in its tracks at the height of its power," says Patterson. "We humans like to think we're at the top of the food chain, but the moment we step off our paved streets, these other animals are really on top."

What makes a man-eater? Check the teeth 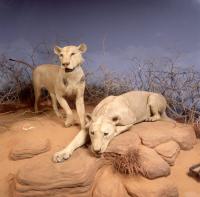 Tsavo Lions on Display at The Field Museum