TEMPE, Ariz. – The idea that drinking red wine may provide health benefits – or possibly even extend your life — is an appealing thought for many people. Now, there may be added attraction. Researchers have found that when given resveratrol, a compound found in red wine, bees consume less food.

Previous scientific studies on resveratrol show that it lengthens the lifespan of diverse organisms ranging from unicellular yeast, to fruit flies and mice. Since bees are social animals like humans, a team of scientists from Arizona State University, the Norwegian University of Life Sciences, and Harvard Medical School, decided to test the effects of the chemical on the honey bee.

In a series of experiments published in the journal Aging, the scientists tested the effects of resveratrol on the lifespan, learning ability, and food perception in honey bees.

Their research has confirmed that not only does this compound extend the lifespan of honey bees by 33 to 38 percent, it also changes the decisions that bees make about food by triggering a "moderation effect" when they eat.

"For the first time, we conducted several tests on the effects of resveratrol by using the honey bee as a model," said Brenda Rascón, an ASU alumnus and doctoral student with Gro Amdam, an associate professor in ASU's School of Life Sciences and the Norwegian University of Life Sciences. "We were able to confirm that under normal living conditions, resveratrol lengthened lifespan in honey bees."

Since resveratrol is an antioxidant, researchers also questioned whether it would be capable of diminishing the damaging effects of "free radicals" — often released during stressful conditions. Free radicals are believed to cause damage to cells, and have an effect on how we age. Resveratrol did not, however, prove to extend the lives of bees living under stressful conditions.

Yet, since the bees tested with the compound were living longer, researchers asked the next question: What's happening that is causing them to live longer?

"Because what we eat is such an important contributor to our physical health, we looked at the bees' sensitivity to sugar and their willingness to consume it," said Amdam. "Bees typically gorge on sugar and while it's the best thing for them, we know that eating too much is not necessarily a good thing."

Interestingly, Amdam, Rascón, and their research team discovered that bees given the compound were less sensitive to sugar. By using different sugar solutions — some very diluted and some with stronger concentrations — they found that bees receiving resveratrol were not as interested in eating the sugar solutions unless the sugar was highly concentrated. The bees basically changed their perception about food.

In a final experiment, they measured how much food the bees would consume if given the opportunity to eat as much sugar water as they possibly could.

"Surprisingly, the bees that received the drug decreased their food intake," said Rascón. "The bees were allowed to eat as much as they pleased and were certainly not starving — they simply would not gorge on the food that we know they like. It's possible resveratrol may be working by some mechanism that is related to caloric restriction — a dietary regimen long-known to extend lifespan in diverse organisms."

The Research Council of Norway and the PEW Charitable Trust funded this study. 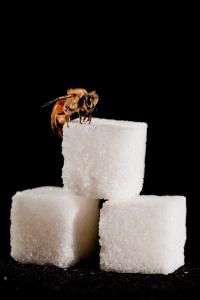 Bees Given Resveratrol Eat Less, and Live up to 38 Percent Longer