RIVERSIDE, Calif. – A research team led by a chemist at the University of California, Riverside has fabricated microscopic polymer beads that change color instantly and reversibly when external magnetic fields acting upon the microspheres change orientation.

The beads or "magnetochromatic microspheres" have excellent structural stability. They also are highly compatible with various types of dispersion media such as water, alcohol, hexane and even polymer solutions, allowing them to retain magnetically tunable colors in a variety of chemical environments.

"Unlike many conventional approaches, the instantaneous color change occurs with no change in the structure or intrinsic properties of the microspheres themselves," said Yadong Yin, an assistant professor of chemistry who led the study that brought together chemists at UCR and engineers at Seoul National University, South Korea. "What changes instead are the magnetic fields acting externally on the orientation of these microspheres, these photonic crystals. Our work provides a new mechanism for inducing color change in materials. Now, for the first time, stable photonic materials with tunable colors can be fabricated on a large scale."

Applications of the new material include display type units such as rewritable or reusable signage, posters, papers and labels, and other magnetically activated security features. The new material also can be used to make environmentally friendly pigments for paints and cosmetics, as well as ink materials for color printing.

"Within a certain range, it is possible also to tune the color of the material by simply rotating the microspheres," Yin said.

Study results appeared June 15 in the online issue of the Journal of the American Chemical Society.

"The new technology has a great potential for a wide range of photonic applications because the on/off switching of the diffraction color by the rotating photonic sphere is fast, greatly simplifying the pixel structures," said Seoul National University's Sunghoon Kwon, a leading expert in biophotonics and nanoengineering, whose lab collaborated with Yin's lab on the research. "Therefore, the new technology is suitable for very large-scale displays, such as active signage."

In their lab experiments, the researchers embedded arrays of spatially ordered magnetic iron oxide nanostructures within each polymer microsphere, enabling its colors to be switched on and off simply by changing the microsphere's orientation – or more precisely the orientation of the array. Furthermore, the new system has the advantage of producing bistable color states, required for making rewritable displays.

Yin explained that the color observed in the new materials is "structural color" because it is caused by interference effects rather than pigments. Such color effects, as seen in colorful feathers of many birds, butterfly wings and beetle shells, are produced when microstructures in these objects are aligned in periodic arrays.

"Conventional methods to produce tunable structural color rely on changing the periodicity of the array or the refractive index of the materials – changes that are difficult to achieve or involve slow processes," he said. "In our method, the color is tuned by changing the relative orientation of the periodic arrays in the microspheres by conveniently using external fields. The use of magnetic fields as external stimuli has the additional benefits of instant action, contactless control and easy integration into electronic devices already in the market."

Said Luke P. Lee, the Lloyd Distinguished Professor of Bioengineering at UC Berkeley, who was not involved in the research, "This is a smart and effective solution to solve the problems of previous works, which could not tune the photonic crystal structures."

To fabricate the microspheres, the researchers first mixed magnetic iron oxide particles into a resin, which is initially in liquid phase but later turns solid on exposure to ultraviolet curable resin. They then dispersed the resin solution in oil (mineral oil or silicon oil), whereupon the resin transformed into spherical droplets in the oil. Next, the researchers applied an external magnetic field to organize the iron oxide particles into periodically ordered structures. These structures display a reflective color if viewed along the direction of the magnetic field. Finally, the research team exposed the liquid system to ultraviolet radiation to polymerize the resin droplets and make them solid microspheres.

Next in the research, Yin and his colleagues plan to work on the specific applications of the magnetochromatic microspheres. "Rewritable energy saving display units such as papers and posters are our main interests," he said. "We will also try to develop similar new material for chemical and biological sensors."

Yin, recently named a Cottrell Scholar by the Research Corporation for Science Advancement, and Kwon were joined in the research by Jianping Ge (first author of the research paper), Le He, Zhenda Lu and James Goebl of UCR; and Howon Lee, Junhoi Kim and Hyoki Kim of Seoul National University.

The four-month study was supported by UC Riverside startup funds and the Petroleum Research Fund administered by the American Chemical Society.

The UCR Office of Technology Commercialization has filed a patent application on the technology and is currently seeking partners in industry interested in developing the technology commercially. 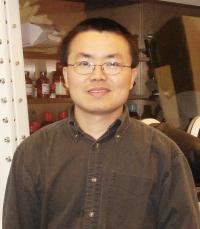