Dramatic habitat loss by 2020 threatens the population of the planet's most endangered chimp subspecies, according to research published in BMC Evolutionary Biology. The work suggests that climate change could do more harm to chimpanzee populations than previously realised.

The Nigeria-Cameroon Chimpanzee (Pan troglodytes ellioti) is the most endangered of all chimpanzee subspecies in the world, with only about 6,000 individuals estimated in the wild. While their habitats are already threatened by logging, agriculture and illegal hunting, few studies have looked at the possible effects of climate change.

First author Paul Sesink Clee, Graduate Research Fellow at Drexel University, USA, said: "The Nigeria-Cameroon chimpanzee is perhaps the least studied of all chimpanzee subspecies. This is the first time that their distribution and habitat has been studied in such detail, and the data used to predict how their habitats might alter under climate change. We were surprised to see that the Nigeria-Cameroon chimpanzees living in the savanna-woodland habitat of central Cameroon are under the most immediate threat of climate change, and may completely lose their habitat within our lifetime."

The research team, one of the few groups studying Nigeria-Cameroon chimpanzees in the wild, mapped their precise geographic locations using reports of sightings, evidence of activity including nests and tools, and fecal and hair samples collected for genetic analyses.

In the most detail to date, they mapped the distribution of two distinct populations of P. t. ellioti - those in the mountainous rainforests of western Cameroon, and those in central Cameroon where three distinct habitats converge to form a mosaic of forest-woodland-savanna. These fragile mosaics of ecosystems (or 'ecotones') are thought to be important in driving variation and diversification of species all over the world.

They combined this population data with the environmental characteristics of their locations (including climate, slope, vegetation and tree cover) to determine how habitat drives the distribution of the Nigeria-Cameroon Chimpanzee. They then predicted how these habitats would change under climate change scenarios for years 2020, 2050, and 2080. The scenarios were provided by the UN's Intergovernmental Panel on Climate Change and considered a varying range of factors including use of fossil and non-fossil fuels, human population growth, and environmental protection efforts.

While the team predicted little change in the mountainous rainforest habitat, the ecotone habitat of the second population was predicted to decline quickly under all scenarios by the year 2020 and could disappear almost entirely under the worst case scenario by 2080. With roughly half of the 6,000 Nigeria-Cameroon chimpanzees existing in the ecotone habitat of central Cameroon, the results suggest that this subspecies of chimpanzee is particularly vulnerable to climate change.

The authors note that their models do not take into account the potential for these chimpanzee populations to adapt to their changing habitats, or migrate to new areas with optimal conditions.

Related research papers from the team are also published in the same issue of BMC Evolutionary Biology, revealing more details on three genetically distinct populations of chimpanzees in Cameroon and eastern Nigeria (P. t. ellioti and P. t. troglodytes) and how natural selection and environmental variation play a role in shaping patterns of chimpanzee genetic diversity.

Please credit images as provided in the file names

To receive a copy of the research articles under embargo, please contact Joel Winston (Joel.Winston@biomedcentral.com) 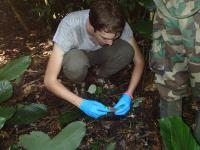 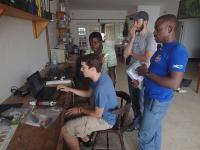