Blocked blood vessels can quickly become dangerous. It is often necessary to replace a blood vessel - either by another vessel taken from the body or even by artificial vascular prostheses. Together, Vienna University of Technology and Vienna Medical University have developed artificial blood vessels made from a special elastomer material, which has excellent mechanical properties. Over time, these artificial blood vessels are replaced by endogenous material. At the end of this restorative process, a natural, fully functional vessel is once again in place. The method has already been used successfully in rats.

Arteriosclerotic vascular disorders are one of the most common causes of death in industrialized countries. In this situation a bypass operation is often the only solution. Normally, blood vessels are taken from another part of the patient's body and used to replace the damaged vessel. Thanks to a joint project undertaken by TU Wien and the Medical University of Vienna, artificially manufactured vessels should be used more frequently in future.

The most important thing is to find a suitable material. The artificial materials that have been used so far are not ideally compatible with body tissue. The blood vessel can easily become blocked, especially if it is only small in diameter.

TU Wien has therefore developed new polymers. "These are so-called thermoplastic polyurethanes," explains Robert Liska from the Institute of Applied Synthetic Chemistry of Vienna University of Technology. "By selecting very specific molecular building blocks we have succeeded in synthesizing a polymer with the desired properties."

To produce the vascular prostheses, polymer solutions were spun in an electrical field to form very fine threads and wound onto a spool. "The wall of these artificial blood vessels is very similar to that of natural ones," says Heinz Schima of the Medical University of Vienna. The polymer fabric is slightly porous and so, initially, allows a small amount of blood to permeate through and this enriches the wall with growth factors. This encourages the migration of endogenous cells. The interaction between material and blood was studied by Martina Marchetti-Deschmann at TU Wien using spatially resolved mass spectrometry.

The new method has already proved very successful in experiments with rats. "The rats' blood vessels were examined six months after insertion of the vascular prostheses," says Helga Bergmeister of MedUni Vienna. "We did not find any aneurysms, thromboses or inflammation. Endogenous cells had colonized the vascular prostheses and turned the artificial constructs into natural body tissue." In fact, natural body tissue re-grew much faster than expected so that the degradation period of the plastic tubes can be even shorter. Further adaptations are currently being made to the material.

The project was recently awarded PRIZE prototype funding from Austria Wirtschaftsservice (AWS). A few more preclinical trials are necessary before the artificial blood vessels can be used in humans. However, based on the results so far, the research team is very confident that the new method will prove itself for use in humans in a few years time. 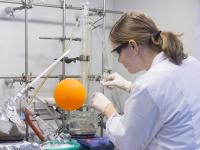