TEMPE, Ariz. – If you have ever felt that your children are your life's work, then you may in fact be recognizing a high-level psychological need. Caring for your children, feeding them, nurturing them, educating them and making sure they get off on the right foot in life – all of the things that make parenting successful – may actually be deep rooted psychological urges that we fulfill as part of being human.

This is according to a team of psychologists who have updated a cornerstone of modern psychology – Abraham Maslow's pyramid of needs. Maslow's pyramid describes human motivations from the most basic to the most advanced. But Maslow's time tested pyramid, first proposed in the 1940s, had begun to look a bit weathered and outdated.

So a team of psychologists, including two from Arizona State University, recast the pyramid. In doing so, they have taken on one of psychology's iconic symbols and have generated some controversy along the way.

The revamp of Maslow's pyramid reflects new findings and theory from fields like neuroscience, developmental psychology and evolutionary psychology, said Douglas Kenrick, an ASU professor of psychology and lead author of the paper, "Renovating the pyramid of needs: Contemporary extensions built upon ancient foundations." The paper was published in the March issue of Perspectives on Psychological Sciences.

Despite being one of psychology's most memorable images, Maslow's pyramid hasn't always been supported by empirical research, said Steven Neuberg, an ASU Foundation professor and coauthor of the paper.

"Within the psychological sciences, the pyramid was increasingly viewed as quaint and old fashioned, and badly in need of updating," Neuberg added.

"It was based on some great ideas, several of which are worth preserving," Kenrick said. "But it missed out on some very basic facts about human nature, facts which weren't well understood in Maslow's time, but were established by later research and theory at the interface of psychology, biology and anthropology."

Maslow developed the pyramid of needs to represent a hierarchy of human motives, with those at the bottom taking precedence over those higher up. At the base of Maslow's pyramid are physiological needs – hunger, thirst and sexual desire.

According to Maslow, if you are starving and craving food that will trump all other goals. But if you are satisfied on one level, you move to the next. So, once you are well fed, you worry about safety. Once you are safe, you worry about affection and esteem and so forth. Perhaps most famously, at the top of Maslow's pyramid sat the need for self-actualization – the desire to fulfill one's own unique creative potential.

The research team – which included Vladas Griskevicius of the University of Minnesota, Minneapolis, and Mark Schaller of the University of British Columbia, Vancouver – restructured the famous pyramid after observing how psychological processes radically change in response to evolutionarily fundamental motives, such as self-protection, mating or status concerns.

The bottom four levels of the new pyramid are highly compatible with Maslow's, but big changes are at the top. Perhaps the most controversial modification is that self-actualization no longer appears on the pyramid at all. At the top of the new pyramid are three evolutionarily critical motives that Maslow overlooked – mate acquisition, mate retention and parenting.

The researchers state in the article that while self-actualization is interesting and important, it isn't an evolutionarily fundamental need. Instead, many of the activities that Maslow labeled as self-actualizing (artistic creativity, for example) reflect more biologically basic drives to gain status, which in turn serves the goal of attracting mates.

"Among human aspirations that are most biologically fundamental are those that ultimately facilitate reproduction of our genes in our children's children," Kenrick explained. "For that reason, parenting is paramount."

The researchers are not saying that artists or poets are consciously thinking about increasing their reproductive success when they feel the inspiration to paint or write.

"Reproductive goals are ultimate causes," Kenrick added, "like the desire of birds to migrate because it helps them survive and reproduce. But at a proximate (or immediate psychological) level, the bird migrates because its brain registers that the length of day is changing. In our minds, we humans create simply because it feels good to us; we're not aware of its ultimate function."

"You could argue that a peacock's display is as beautiful as anything any human artist has ever produced," Kenrick said. "Yet it has a clear biological function – to attract a mate. We suspect that self actualization is also simply an expression of the more evolutionarily fundamental need to reproduce."

But, Kenrick adds, for humans reproduction is not just about sex and producing children. It's also about raising those children to the age at which they can reproduce as well. Consequently, parenting sits atop the revamped pyramid.

There are other distinctions as well. For Maslow, once a need was met, it disappeared as the individual moved on to the next level. In the reworked pyramid, needs overlap one another and coexist, instead of completely replacing each other. For example, certain environmental cues can make them come back. If you are walking down the street thinking about love, art or the meaning of life, you will revert quickly to the self-protection level if you see an ominous-looking gang of young men headed your way.

The new pyramid already has generated some controversy within the field. The published article was accompanied by four commentaries. While the commentaries agreed with the basic evolutionary premise of the new pyramid, they take issue with some of the specific details, including the removal of self-actualization and the prominence of parenting in the new pyramid.

"The pyramid of needs is a wonderful idea of Maslow's," Kenrick said. "He just got some of it wrong. Now people are talking about it again, which will help us get it right."

Maslow's pyramid gets a much needed renovation 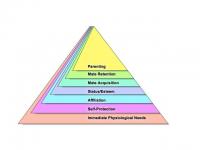