Called WHISKiT, the new model incorporates 60 individual whiskers, which are each anatomically, spatially and geometrically correct. The technology could help researchers predict how whiskers activate different sensory cells to influence which signals are sent to the brain as well as provide new insights into the mysterious nature of human touch.

The research was published last week in the Proceedings of the National Academy of Sciences.

With just a brush of their whiskers, rats can extract detailed information from their environments, including an object's distance, orientation, shape and texture. This keen ability makes the rat's sensory system ideal for studying the relationship between mechanics (the moving whisker) and sensory input (touch signals sent to the brain).

But while the rat whisker system is a widely used simplified model system in sensory neuroscience, it's challenging to study an animal's nervous system as it moves to interact with its natural environment.

"We cannot measure the signals at the base of a real rat's whisker using current technology because, as soon as you embed a sensor, it interferes with the signals themselves," said Northwestern's Mitra Hartmann, the study's senior author. "The only way we can really capture a rat actively sensing its environment under natural conditions is to simulate it."

With potential to overcome these challenges, simulations have become an increasingly important component of neuroscience. By developing WHISKiT, the study authors now have the first complete model of tactile input to a moving sensory system, which shows how rats actively "whisk" and passively sense their complex 3D environments.

"Because none of the individual whiskers works in isolation, WHISKiT is crucial to understanding how the brain processes incoming tactile sensory information," said Nadina Zweifel, the paper's first author. "It's equivalent to a tactile 'camera' that can capture the mechanical signals an animal may acquire while using the whiskers to interact with the environment. That way, we believe that our tool considerably widens the range of possibilities for computational and experimental studies in the future."

Hartmann is a professor of biomedical and mechanical engineering at Northwestern's McCormick School of Engineering, where she is a member of the Center for Robotics and Biosystems and the Northwestern University Interdepartmental Neuroscience program. Zweifel is a Ph.D. candidate in Hartmann's laboratory.

To develop the new WHISKiT model, the Northwestern team combined more than a decade's worth of experimental data from Hartmann's lab. Because every whisker is slightly different, her group previously calculated the proper geometry (including arc, base diameter and slope) for individual whiskers. After validating models for individual whiskers, the researchers combined the whiskers into a full array.

The resulting model considers the geometry, spatial arrangement and movement of all 60 whiskers (30 on each side) on a rat's face. Each whisker is embedded in a follicle, where the mechanical signals are generated at the base.

WHISKiT also incorporates new data collected from 3D scans that Zweifel captured of rats' natural environments, including in urban alleys, around dumpsters and at drain pipes, across the cities of Chicago and Evanston. The model simulates rats in these natural environments ("whisking" around a drain pipe, for example) as well as in laboratory settings. The researchers found that each typical, exploratory scenario generates a unique pattern of data.

The researchers next plan to use the simulation to address several long-standing questions, including how rats can use touch to distinguish between stationary and moving objects and how active whisking compares to passive sensing.

The study, "A dynamical model for generating synthetic data to quantify active tactile sensing behavior in the rat," was authored by Hartmann, Zweifel, Nicholas Bush, Ian Abraham and Todd Murphey. 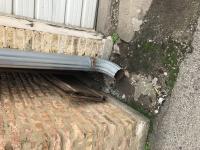