Landslides caused by heavy rainfall from the remnants of Hurricane Earl caused the reported deaths of at least 39 people in eastern Mexico. That kind of rainfall was now seen in Tropical Storm Javier.

The Global Precipitation Measurement mission, or GPM core observatory satellite, flew above Tropical Storm Javier on Aug. 8, 2016 at 12:19 a.m. EDT (0419 UTC). Rainfall was analyzed using GPM's Microwave Imager (GMI) and Dual-Frequency Precipitation Radar (DPR) instruments. Those data showed that Javier was producing heavy rainfall both near the center of the tropical storm and also near Mexico's coast northeast of Javier. Rain was measured by DPR falling at a rate of over 4.1 inches (103 mm) per hour near Javier's center of circulation. Precipitation was also calculated by GPM's GMI to be coming down at a rate of almost 2.4 inches (60 mm) per hour near Mazatlán, Mexico.

The National Hurricane Center expects that heavy rainfall to affect warning areas. Javier is expected to produce total rain accumulations of 3 to 6 inches over coastal parts of the Mexican states of Sinaloa and southern Sonora into Baja California Sur with possible isolated maximum amounts of 10 inches through Wednesday morning.

At 11 a.m. EDT (1500 UTC), the center of Tropical Storm Javier was located near 22.0 degrees north and 109.2 degrees west longitude. That's about 75 miles (125 km) southeast of Cabo San Lucas, Mexico. Javier is moving toward the northwest near 10 mph (17 kph), and this motion with a decrease in forward speed is expected through Tuesday. On the forecast track, the center of Javier is forecast to pass near or over the southern tip of the Baja California peninsula later today, and move near the west coast of Baja California Sur tonight and Tuesday. Maximum sustained winds are near 50 mph (85 kph) with higher gusts. Some strengthening is possible while Javier passes near the extreme Baja California peninsula. 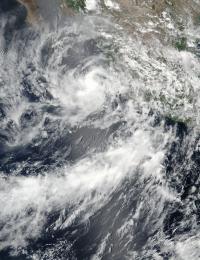