A team of scientists led by Prof. KANG Le at the Institute of Zoology, Chinese Academy of Sciences, reported an unprecedented animal defense mechanism by which an olfactory aposematic (warning) signal can be converted to a hypertoxic chemical to facilitate an antipredator defense in locusts.

The findings were published as "Phenylacetonitrile in locusts facilitates an antipredator defense by acting as an olfactory aposematic signal and cyanide precursor" in Science Advances on Jan. 23, 2019.

Animal aggregation is a very common phenomenon with important biological significance in the natural world. High-density locusts can form large swarms that are placed at high risk of exposure to predators. Therefore, an effective defense strategy by gregarious locusts is very crucial for their survival and migration.

A previous study showed that gregarious locusts may use warning coloration associated with toxic extracts from food plants for antipredator defense against predation. However, the functional coordination and biosynthesis of aposematic signals and toxins in locusts are poorly understood.

Using chemical analysis, researchers revealed that phenylacetonitrile (PAN) is a dominant density-dependent volatile compound that can be detected in all tissues and body fluids of gregarious locusts (Fig. 1A), but is absent in solitary locusts (Fig. 1B). Behavioral assays excluded PAN role in locust aggregations (Fig. 1C).

Using transcriptome analysis, RNA interference-mediated gene knockdown, and chemical analysis of deuterium-labeled compounds, the researchers identified for the first time that a novel cytochrome P450 (CYP) gene CYP305M2 catalyzes the oximation reaction in the biosynthesis pathway from phenylalanine to PAN in animal species.

They showed that this gene encodes a rate limiting enzyme, whose expression levels directly respond to the changes in locust population density.

To test whether PAN production by locusts influences predation by the great tit, the researchers performed a series of dual-choice and predation tests involving locusts with or without PAN load.

They found that great tits refused to attack and feed on PAN-treated solitary locusts (Fig. 2A).

These findings suggest that PAN produced by gregarious locusts reduces bird predation and serves as an olfactory aposematic signal in locust defense.

Although biosynthesis and administration of hydrogen cyanide (HCN) is prevalent among plants, it is relatively rare in animals. Here, the researchers revealed for the first time that a de novo biosynthetic pathway of HCN is present in locusts and HCN from the PAN precursor is significantly promoted when locusts are threatened by bird predators (Fig. 3).

Thus, the plasticity of PAN biosynthesis in response to population density is crucial for the optimization of the antipredator defense strategies of locusts under diverse environmental conditions.

The results changed the previous viewpoint on the role of PAN in locust aggregations and provided solid evidence to support its role in locust defense. The outcome of this study is relevant not only to the deep understanding of prey-predator interactions, but also to the development of novel strategies to control outbreaks of agricultural pests. 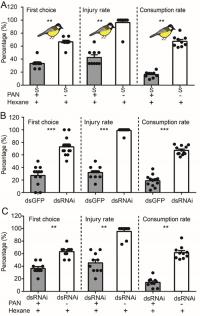 Model of the Mechanism of Aposematic Antipredator Defense in Locusts