NASA has a housing development in the works to provide living quarters for groups of mice and rats in the prime real estate aboard the International Space Station. NASA's Rodent Research Facility, developed by scientists and engineers at NASA's Ames Research Center in Moffett Field, California, is a new hardware system to carry rodents safely from Earth to the orbiting laboratory and provide long-term accommodation aboard the station. The rodent research system enables researchers to study the long-term effects of microgravity--or weightlessness--on mammalian physiology.

Microgravity has negative effects on most body tissues. Biomedical research conducted in space is essential for us to gain a better understanding of the health risks of long-duration spaceflight and to develop ways to mitigate those risks.

Astronauts currently spend six months at a time living in a weightless environment aboard the space station. Mission planners anticipate future missions to Mars will last two years or more and will expose crews to varying levels of gravity and space radiation. We must know in advance how humans will adjust to these conditions.

Researchers study rodents in space to understand better how microgravity affects various body systems--cardiovascular, endocrine, immune, musculoskeletal, nervous, reproductive and sensorimotor--and to discover what cellular, genetic and molecular mechanisms are responsible for spaceflight-induced changes. Researchers can apply knowledge of these mechanisms to develop ways to prevent or treat adverse effects of spaceflight.

Not only are the results from these studies important for protecting the health of astronauts who will embark upon long-term exploration missions, but they can also help treat disease on Earth. Space station bone and immunology studies are examples of research that is relevant to human health in space and on Earth, as spaceflight-induced changes in bones and the immune system resemble common age-related conditions of osteoporosis and a suppressed immune system on Earth.

Ultimately, researchers will use the rodent research system to conduct studies as long as half a year in duration. Because six months is approximately one-fourth to one-third of a rodent's lifespan, "studies on these rodents in space have the potential to extrapolate important implications for humans living in space well beyond six months," according to the National Research Council's report.

Since rodents develop and age much faster than humans, studying rodent model organisms accelerates the understanding of diseases that may take years or decades to develop in humans. Rodents may be studied in space during different developmental stages of life. Additionally, spaceflight rodent studies are important for developing countermeasures--procedures, drugs or devices--to protect health during spaceflight. "Studies that use different genetic strains of rodents will help researchers pinpoint the roles played by specific genes in gravity sensing and responses," said Ruth Globus, Ph.D., Rodent Research Project scientist and researcher in the Space Biosciences Division at Ames.

NASA's rodent research system benefits from decades of prior experience with spaceflight rodent studies. Scientists and engineers at Ames developed the new system for the space station based on the Animal Enclosure Module that flew aboard 27 space shuttle missions between 1983 and 2011 and supported studies ranging from four to 18 days.

Two short-duration studies recently conducted using the prior generation system include Mouse Immunology, a study of T-cell immune system function that flew aboard space shuttle Discovery's STS-131 mission in 2010, and Mouse Immunology-2, a study of immune response to respiratory viral infection that also flew aboard Discovery during the STS-133 mission in 2011. Through a biospecimen sharing program, these two flight missions supported 17 separate investigations of spaceflight effects on multiple organ systems, in addition to the two primary studies of immune function.

Each rodent study aboard the space station will use a set of reusable modules. A transporter module will carry rodents to the station aboard an uncrewed SpaceX Dragon spacecraft. After docking to the station, astronauts will use an access module to transfer rodents from the transporter into one or more habitat modules. The habitats operate in an EXPRESS rack facility aboard the station. Crew members will use the access module to examine the rodents closely during the study and to transfer them between habitats as needed.

Each habitat module provides as many as 10 mice or six rats with all of the basics they need to live comfortably aboard the station including water, food, lighting and fresh air. Rodents easily can move around the living space by grasping grids that line the floor and walls. The modules include data downlink capability that enables monitoring of environmental conditions such as temperature. A visible light and infrared video system allows the crew in space and scientists and veterinarians on the ground to monitor behavior and overall health of the rodents on a daily basis.

The maiden voyage of the rodent research system is scheduled to launch aboard SpaceX-4 in 2014. The goal of this first mission is to validate system performance and for the station crew to demonstrate critical research operations. On this same mission, the crew will conduct the Rodent Research-1 study, which is a two-fold investigation for NASA to validate the hardware, while the Center for the Advancement of Science in Space (CASIS) facilitates the first commercial research. Experiments will focus on the biological mechanisms of muscle tissue loss and maintenance. The ultimate goal of this research is to develop new treatments for muscle-wasting disorders. The second rodent research mission is planned to fly on SpaceX-6 in 2014.

NASA's rodent research system is opening up a new era in biomedical research for both NASA scientists and researchers in the commercial sector. "In the coming years, rodent studies conducted aboard the International Space Station will gather foundational data that will help advance human space exploration and provide new opportunities to improve quality of life on Earth," said Globus.

Rodents in residence aboard the space station "will enable, for the first time, spaceflight research that takes full advantage of the giant strides in molecular biology made on Earth in recent years. This includes advances in global gene expression analysis technology and a wide variety of novel genetic strains," said Globus. Answers to a new set of questions will be within reach, albeit in a very high place. 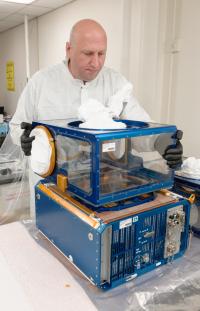 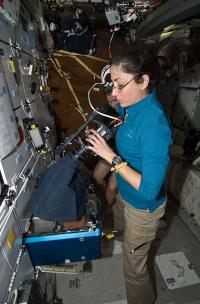