Flowering plants are well known for their special relationship to the insects and other animals that serve as their pollinators. But, before the rise of angiosperms, another group of unusual evergreen gymnosperms, known as cycads, may have been the first insect-pollinated plants. Now, researchers reporting in the journal Current Biology on August 16 have uncovered the earliest definitive fossil evidence of that intimate relationship between cycads and insects.

The discovery came in the form of an ancient boganiid beetle preserved in Burmese amber for an estimated 99 million years along with grains of cycad pollen. The beetle also shows special adaptations, including mandibular patches, for the transport of cycad pollen.

"Boganiid beetles have been ancient pollinators for cycads since the Age of Cycads and Dinosaurs," says Chenyang Cai, now a research fellow at the University of Bristol. "Our find indicates a probable ancient origin of beetle pollination of cycads at least in the Early Jurassic, long before angiosperm dominance and the radiation of flowering-plant pollinators, such as bees, later in the Cretaceous."

When Cai's supervisor Diying Huang at the Nanjing Institute of Geology and Palaeontology, Chinese Academy of Sciences, first showed him the beetle trapped in amber, he was immediately intrigued. He recognized that its large mandibles with bristly cavities might suggest the beetle was a pollinator of cycads.

After cutting, trimming, and polishing the specimen to get a better look under a microscope, Cai's excitement only grew. The beetle carried several clumps of tiny pollen grains. Cai consulted Liqin Li, an expert in ancient pollen at the Chinese Academy of Sciences, who confirmed that the pollen grains belonged to a cycad.

The researchers also conducted an extensive phylogenetic analysis to explore the beetle's family tree. Their analysis indicates the fossilized beetle belonged to a sister group to the extant Australian Paracucujus, which pollinate the relic cycad Macrozamia riedlei. The finding, along with the current disjunct distribution of related beetle-herbivore and cycad-host pairs in South Africa and Australia, support an ancient origin of beetle pollination of cycads, the researchers say.

Cai notes that the findings together with the distribution of modern boganiid beetles lead him to suspect that similar beetle pollinators of cycads are yet to be found. He's been looking for them for the last five years. The challenge, he says, is that older Jurassic beetles are generally found as compression fossils not trapped in amber.

Financial support was provided by the Strategic Priority Research Program (B) and the Chinese Academy of Sciences (CAS) program Macroevolutionary Processes and Paleoenvironments of Major Historical Biota, the National Natural Science Foundation of China, the Natural Science Foundation of Jiangsu Province, the Youth Innovation Promotion Association of the CAS, and a Newton International Fellowship from the Royal Society. 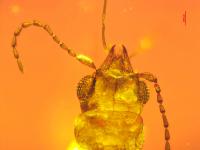 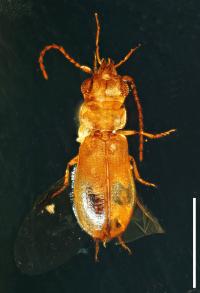