A mere glass full of water from Monterey Bay Aquarium's 1.2 million-gallon Open Sea tank, among the 10 largest aquariums in the world, is all scientists really needed to identify the Pacific Bluefin tuna, dolphinfish and most of the other 13,000 fish swimming there.

Researchers also for the first time used DNA from water samples to discern which of the species were most plentiful in the tank.

Being able to determine the relative abundance of fish species in a body of water is the next step in possibly using modern DNA identification techniques to census fish in the open ocean, according to Ryan Kelly, University of Washington assistant professor of marine and environmental affairs, and lead author of a paper in the Jan. 15 issue of PLOS ONE.

Currently most scientists net, see or in other ways count fish to determine what species are present and in what proportions in marine environments.

"It might be unpleasant to think about when going for a swim in the ocean, but the water is a soup of cells shed by what lives there," Kelly said. Fish shed cells from their skin, damaged tissues and as body wastes.

"Every one of those cells has DNA and if you have the right tools you can tell what species the cell came from. Now we're working to find the relative abundance of each species present," he said.

It was barely two years ago that an influential paper was published by scientists who determined the presence of an endangered species they were seeking in a river using this "environmental DNA" or "eDNA." Since then the technique has been used to look for other specific species in both freshwater and one marine setting.

"Clearly this is an effective tool in the wild when you know what you're looking for," Kelly said.

He and his co-authors, Jesse Port, Kevan Yamahara and Larry Crowder with Stanford University's Center for Ocean Solutions, took the work another step further with funding from the David and Lucile Packard Foundation. The researchers wanted to see how well they could detect DNA using a single set of "primers," molecular probes designed by another group just the year before this study, that zero in on portions of DNA that indicate an animal has a backbone and is a vertebrate. The sea tank at Monterey Bay Aquarium was suggested because the inhabitants are known and could be compared to what the new technique revealed was present, giving the authors a way to judge the technique's accuracy. The researchers analyzed about two pint glasses worth of water in the course of their project and Ryan said the DNA data of what's in the tank likely could have been revealed by an even smaller sample.

The approach proved effective by both identifying the eight bony fishes in the tank and determining that tuna and sardines made up the greatest amount of biomass in the tank, which tank managers could document. The technique turned out to be so finely tuned that it also picked up DNA from long-dead menhaden from the Atlantic Ocean, fish that had been processed, transported and added to the tank as food. It was a surprise when an Atlantic species turned up, until the researchers realized where the DNA was coming from, and then they made calculations to take that into account.

The primers were unable to detect DNA from two groups of vertebrates in the tank: the turtles and the fish with cartilage in place of bones, such as rays and sharks. Kelly said that these kinds of biases in detection are inevitable, highlighting the need to focus on the design of additional general primers.

Being able to determine what's living in a body of water in the ocean using environmental DNA could be less expensive and time consuming than traditional census methods. The process could help scientists charged with monitoring and managing aquatic habitats, could reveal the arrival of invasive species before they become a major problem, or provide ways to look at food webs and other basic ecosystem functions, Kelly said.

The mixing of ocean waters by tides, currents or other forces is one hurdle to using this technique in the open ocean. But the group's preliminary work in Monterey Bay revealed DNA differences between areas of near-shore sea grass areas and kelp beds farther out but still within sight of each other. Additional field testing is planned in San Francisco Bay.

While fish research using environmental DNA only started in recent years, the revolution using DNA to detect what's present in particular habitats started in the early 2000s. Since then the cost of gene sequencing has plummeted, with what was $5,300 in 2001 costing about 6 cents today, Kelly said. Microbiologists developed and used techniques to survey bacteria, viruses and other microorganisms in everything from the human gut to the ocean for a decade before any research group published results using it for fish and other aquatic organisms that could actually be seen. 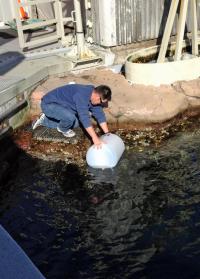