New research has shown that despite moving house frequently, bats choose to roost with the same social groups of 'friends'.

The study, published today in the scientific journal PLOS ONE, found that different social groups roost in separate, though adjacent, parts of woodland. The findings have important implications for conservation as bats may not be able to move to another area if a section of woodland is felled. The research was carried out by scientists from the Centre for Ecology & Hydrology, the University of Exeter and the University of Oxford.

Dr Tom August from the Centre for Ecology & Hydrology, who conducted the study, said, "When the first results came through it was a real eureka moment, I hadn't expected to see so many separate social groups in the woodland."

The study was carried out over a five year period in Wytham Woods, Oxfordshire in the UK. Nearly 1500 bats were fitted with small aluminium arm bands and four bats were tagged with tiny lightweight radio-transmitters to enable them to be tracked. The radio tracking showed that the bats changed roost site frequently - about once every two days.

Dr Fiona Mathews from the University of Exeter who led the research team said, "This work has really important practical implications for bat conservation. We now realise that although social groups of woodland bats 'move house' every few days, they remain within a very small geographical range. This means that even quite small-scale tree felling may destroy all the roosts potentially available to a group."

Each social group was found to occupy a home patch in the wood. Although the two bat species occupied the same area of woodland, the home patches of the different social groups within the species did not overlap suggesting that social groups may defend their roost areas. The relationships between bats in the same social groups were found to be enduring, in many cases lasting more than a year.

Tom August added, "Learning about bats' social structure helps us understand how best to protect populations in the wild, but this study is only the beginning, we still have a lot to learn."

Co-author Danielle Linton from the University of Oxford said, "The patterns of social organisation that have emerged from seemingly random ring recapture data are fascinating. Using the same sampling regime striking behavioural differences have been revealed between two similar species that roost in the same area."

Dr Fiona Mathews said, "The social networks of animals are poorly understood. Yet they are fundamentally important to processes ranging from information transfer to the spread of disease. Just as some types of people are super-connected on Facebook, this work shows that in animal systems, two very closely related species living in the same habitat can have very different kinds of social network." 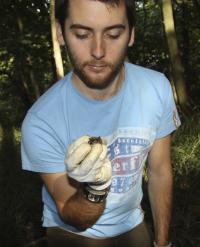 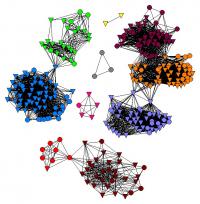