Researchers have shown how millions of years of climate change affected the range and habitat of modern birds, suggesting that many groups of tropical birds may be relatively recent arrivals in their equatorial homes.

The researchers, from the Universities of Cambridge and Oxford, applied climate and ecological modelling to illustrate how the distribution of major bird groups is linked to climate change over millions of years. However, while past climate change often occurred slowly enough to allow species to adapt or shift habitats, current rates of climate change may be too fast for many species, putting them at risk of extinction. The results are reported in Proceedings of the National Academy of Sciences.

"Palaeontologists have documented long-term links between climate and the geographic distributions of major bird groups, but the computer models needed to quantify this link had not been applied to this question until now," said Dr Daniel Field from Cambridge's Department of Earth Sciences, the paper's co-lead author.

For the current study, the researchers looked at ten bird groups currently limited to the tropics, predominantly in areas that were once part of the ancient supercontinent of Gondwana (Africa, South America and Australasia). However, early fossil representatives of each of these groups have been found on northern continents, well outside their current ranges.

For example, one such group, the turacos ('banana eaters') are fruit-eating birds which are only found in the forests and savannahs of sub-Saharan Africa, but fossils of an early turaco relative have been found in modern-day Wyoming, in the northern United States.

Today, Wyoming is much too cold for turacos for most of the year, but during the early Palaeogene period, which began with the extinction of non-avian dinosaurs 66 million years ago, the Earth was much warmer. Over time, global climates have cooled considerably, and the ancestors of modern turacos gradually shifted their range to more suitable areas.

"We modelled the habitable area for each group of birds and found that their estimated habitable ranges in the past were very different from their geographic distributions today, in all cases shifting towards the equator over geological time," said Dr Erin Saupe from the University of Oxford, the paper's other lead author.

Saupe, Field and their collaborators mapped information such as average temperature and rainfall and linked it to where each of the bird groups is found today. They used this climatic information to build an 'ecological niche model' to map suitable and unsuitable regions for each bird group. They then projected these ecological niche models onto palaeoclimate reconstructions to map potentially-suitable habitats over millions of years.

The researchers were able to predict the geographic occurrences of fossil representatives of these groups at different points in Earth's history. These fossils provide direct evidence that these groups were formerly distributed in very different parts of the world to where they are presently found.

"We've illustrated the extent to which suitable climate has dictated where these groups of animals were in the past, and where they are now," said Field. "Depending on the predictions of climate change forecasts, this approach may also allow us to estimate where they might end up in the future."

"Many of these groups don't contain a large number of living species, but each lineage represents millions of years of unique evolutionary history," said Saupe. "In the past, climate change happened slowly enough that groups were able to track suitable habitats as these moved around the globe, but now that climate change is occurring at a much faster rate, it could lead to entire branches of the tree of life going extinct in the near future."

The research was funded in part by the Natural Environment Research Council (NERC). 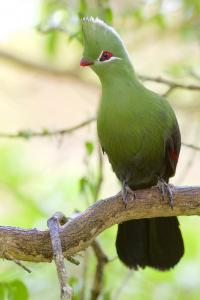