As part of their project BioSCAN - devoted to the exploration of the unknown insect diversity in and around the city of Los Angeles - the scientists at the Natural History Museum of Los Angeles County (USA) have already discovered numerous insects that are new to science, but they are still only guessing about the lifestyles of these species.

"Imagine trying to find a given 2 mm long fly in the environment and tracking its behavior: it is the smallest imaginable needle in the largest haystack. So when researchers discover new life histories, it is something worth celebrating," explains Dr. Brian Brown, lead author of a recent paper, published in the scholarly open-access Biodiversity Data Journal.

However, Brown and Maria Wong, former BioSCAN technician, while doing field work at the L.A. County Arboretum, were quick to reveal a curious peculiarity about one particular species discovered as part of the project a few years ago. They successfully lured female phorid flies by means of crushing tiny, invasive snails and using them as bait. In comparison, the majority of phorid flies, whose lifestyles have been observed, are parasitoids of social insects like ants.

Within mere seconds after the team crushed tiny invasive snails (Oxychilus draparnaudi), females representing the fly species Megaselia steptoeae arrived at the scene and busied themselves feeding. Brown and Wong then collected some and brought them home alive along with some dead snails. One of the flies even laid eggs. After hatching, the larvae were observed feeding upon the rotting snails and soon they developed to the pupal stage. However, none was reared to adulthood.

Interestingly, the host species - used by the fly to both feed on and lay eggs inside - commonly known as Draparnaud's glass snail, is a European species that has been introduced into many parts of the world. Meanwhile, the studied fly is native to L.A. So far, it is unknown when and how the mollusc appeared on the menu of the insect.

To make things even more curious, species of other snail genera failed to attract the flies, which hints at a peculiar interaction worth of further study, point out the scientists behind the study, Brown and Jann Vendetti, curator of the NHM Malacology collection. They also hope to lure in other species of flies by crushing other species of snails.

In recent years, the BioSCAN project led to other curious discoveries from L.A., also published in Biodiversity Data Journal. In 2016, a whole batch of twelve previously unknown scuttle fly species was described from the heart of the city. A year later, another mysterious phorid fly was caught ovipositing in mushroom caps after Bed & Breakfast owners called in entomologists to report on what they had been observing in their yard. 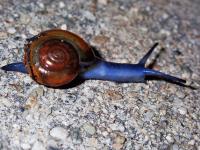