Hydrogen fuel cells are fed hydrogen and oxygen to produce electricity, with water as their only by-product. These fuel cells contain 'proton conducting membranes' that facilitate the separation of hydrogen's positive and negative particles, protons and electrons, a process that ultimately leads to the production of electricity.

Protons need to easily move across these membranes for the process to be efficient. Current proton conducting membranes are made from liquids and cannot operate effectively under dry conditions, making their fabrication complicated and expensive. Scientists are looking for ways to fabricate solid membranes made from water-free electrolytes that provide better mechanical and thermal stability than their liquid counterparts, but are also cost-effective and still conduct protons well.

The molecular structure of the coordination polymer glass facilitated the movement of protons across it under dry conditions at 120°C. When tested in a hydrogen fuel cell, it produced high voltage (0.96 volts), well within the range of typical polymer electrolyte membranes. Its power output was also similar to commonly used Nafion membranes.

Ogawa believes their findings offer an interesting approach for using glass polymers in fuel cell applications. The team plans to continue their work with the aim of achieving fuel cell membranes with higher performance and long-term stability.

At iCeMS, our mission is to explore the secrets of life by creating compounds to control cells, and further down the road to create life-inspired materials. 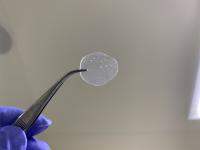