Does quantum mechanics show a connection between the human mind and the cosmos? Are our brains tuned into a "cosmic consciousness" that pervades the universe enabling us to make our own reality? Do quantum mechanics and chaos theory provide a place for God to act in the world without violating natural laws?

Many popular books and films make such claims and argue that key developments in twentieth-century physics, such as the uncertainty principle and the butterfly effect, support the notion that God or a universal mind acts upon material reality. Physicist Victor J. Stenger, author of New York Times bestseller God: The Failed Hypothesis, examines these contentions in QUANTUM GODS: CREATION, CHAOS AND THE SEARCH FOR COSMIC CONSCIOUSNESS (Prometheus Books, $26.98), a carefully reasoned and incisive analysis of popular theories that seek to link spirituality to physics.

"The public understanding of modern physics is seriously out of whack, thanks largely to pop junk like The Secret and What the BLEEP Do We Know? [that] promote a bogus version of quantum mechanics—the belief that 'you create your own reality' by controlling the laws of physics with your mind…," said Geoff Gilpin, author of The Maharishi Effect: A Personal Journey Through the Movement That Transformed American Spirituality. "The world has needed a book like this for a long time. If you care about scientific literacy, Quantum Gods is not optional."

Throughout the book Stenger alternates his discussions of popular spirituality with a survey of what the findings of twentieth-century physics actually mean. Thus he offers the reader a useful synopsis of contemporary religious ideas as well as basic but sophisticated physics presented in layperson's terms.

New Scientist says, "In this much-needed book, physicist Victor Stenger isolates and then debunks the claims of two kinds of "quantum belief"… With Stenger in charge…we are on sure ground. He adds even more value by weaving a thorough beginner's course in quantum physics into his debunking exercise… Even though he skips rather dizzyingly between traditional religious beliefs, quantum spirituality and quantum physics itself, Stenger is a pleasure to read. And, pleasingly, the title Quantum Gods: Creation, Chaos And The Search For Cosmic Consciousness sounds just crackpot enough to attract those readers who will benefit most."

Of particular interest in this book is Stenger's discussion of a new kind of deism, which proposes a God who creates a universe with many possible pathways determined by chance, but otherwise does not interfere with the physical world or the lives of humans. Although it is possible, says Stenger, to conceive of such a God who "plays dice with the universe" and leaves no trace of his role as prime mover, such a God is a far cry from traditional religious ideas of God and, in effect, may as well not exist. Like God: The Failed Hypothesis, this new work presents a rigorously argued challenge to many popular notions of God and spirituality.

Victor J. Stenger (Lafayette, CO) is adjunct professor of philosophy at the University of Colorado and professor emeritus of physics and astronomy at the University of Hawaii. He is the author of the New York Times bestseller God: The Failed Hypothesis— How Science Shows That God Does Not Exist; Has Science Found God?; The Comprehensible Cosmos; Timeless Reality; The Unconscious Quantum Physics and Psychics; and Not by Design.

MEDIA NOTE: Victor J. Stenger is available to discuss popular theories that seek to link spirituality to physics. Contact Prometheus Books at publicity@prometheusbooks.com or 1-800-853-7545 for author contact information or to request press materials or a review copy of QUANTUM GODS: CREATION, CHAOS AND THE SEARCH FOR COSMIC CONSCIOUSNESS (ISBN 978-1-59102-713-3).

Does quantum mechanics show a connection between the human mind and the cosmos? 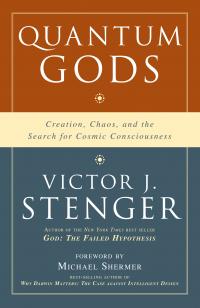 'Quantum Gods: Creation, Chaos, and the Search for Cosmic Consciousness'