HOUSTON -- (Dec. 16, 2014) -- In one of the most comprehensive laboratory studies of its kind, Rice University scientists traced the uptake and accumulation of quantum dot nanoparticles from water to plant roots, plant leaves and leaf-eating caterpillars.

The study, one of the first to examine how nanoparticles move through human-relevant food chains, found that nanoparticle accumulation in both plants and animals varied significantly depending upon the type of surface coating applied to the particles. The research is available online in the American Chemical Society's journal Environmental Science & Technology.

"With industrial use of nanoparticles on the rise, there are increasing questions about how they move through the environment and whether they may accumulate in high levels in plants and animals that people eat," said study co-author Janet Braam, professor and chair of the Department of BioSciences at Rice.

Braam and colleagues studied the uptake of fluorescent quantum dots by Arabidopsis thaliana, an oft-studied plant species that is a relative of mustard, broccoli and kale. In particular, the team looked at how various surface coatings affected how quantum dots moved from roots to leaves as well as how the particles accumulated in leaves. The team also studied how quantum dots behaved when caterpillars called cabbage loopers (Trichoplusia ni) fed upon plant leaves containing quantum dots.

"The impact of nanoparticle uptake on plants themselves and on the herbivores that feed upon them is an open question," said study first author Yeonjong Koo, a postdoctoral research associate in Braam's lab. "Very little work has been done in this area, especially in terrestrial plants, which are the cornerstone of human food webs."

Some toxins, like mercury and DDT, tend to accumulate in higher concentrations as they move up the food chain from plants to animals. It is unknown whether nanoparticles may also be subject to this process, known as biomagnification.

While there are hundreds of types of nanoparticles in use, Koo chose to study quantum dots, submicroscopic bits of semiconductors that glow brightly under ultraviolet light. The fluorescent particles -- which contained cadmium, selenium, zinc and sulfur -- could easily be measured and imaged in the tests. In addition, the team treated the surface of the quantum dots with three different polymer coatings -- one positively charged, one negatively charged and one neutral.

"In industrial applications, nanoparticles are often coated with a polymer to increase solubility, improve stability, enhance properties and for other reasons," said study co-author Pedro Alvarez, professor and chair of Rice's Department of Civil and Environmental Engineering. "We expect surface coatings to play a significant role in whether and how nanomaterials may accumulate in food webs."

Previous lab studies had suggested that the neutral coatings might cause the nanoparticles to aggregate and form clumps that were so large that they would not readily move from a plant's roots to its leaves. The experiments bore this out. Of the three particle types, only those with charged coatings moved readily through the plants, and only the negatively charged particles avoided clumping altogether. The study also found that the type of coating impacted the plants' ability to biodegrade, or break down, the quantum dots.

"Our tests were not specifically designed to measure bioaccumulation in caterpillars, but the data we collected suggest that particles with positively charged coatings may accumulate in cells and pose a risk of bioaccumulation," Koo said. "Based on our findings, more tests should be conducted to determine the extent of this risk under a broader set of ecological conditions."

The research was supported by the National Science Foundation. Additional co-authors include Jing Wang, Qingbo Zhang, Huiguang Zhu and Wassim Chehab, all of Rice, and Vicki Colvin of Brown University.

http://news.rice.edu/wp-content/uploads/2014/12/1215_DOTS-plants-lg.jpg
CAPTION: The buildup of fluorescent quantum dots in the leaves of Arabidopsis plants is apparent in this photograph of the plants under ultraviolet light.
CREDIT: Y. Koo/Rice University 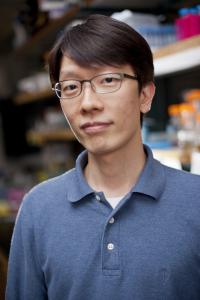