Pink plumage is a sign of good health in lesser flamingos, and a flush of colour often means they are ready to breed.

So when the birds squabble over food, the pinkest flamingos - both male and female - tend to push the others around.

The study, by the University of Exeter and WWT Slimbridge Wetland Centre, also found the birds fight more when food is available in a small area such as a bowl - so the findings suggest captive birds should be fed over a wide space where possible.

"Colour plays an important role in this. The colour comes from carotenoids in their food, which for lesser flamingos is mostly algae that they filter from the water.

"A healthy flamingo that is an efficient feeder - demonstrated by its colourful feathers - will have more time and energy to be aggressive and dominant when feeding."

Dr Rose studied the behaviour of Slimbridge's lesser flamingos in different feeding situations: at an indoor feeding bowl, a larger indoor feeding pool, and outdoors with food available in a large pool.

In the outdoor pool, birds spent less than half as much time displaying aggression, while foraging time doubled (compared to when fed from a bowl).

"When birds have to crowd together to get their food, they squabble more and therefore spend less time feeding," Dr Rose said.

"It's not always possible to feed these birds outdoors, as lesser flamingos only weigh about 2kg and are native to Africa, so captive birds in places like the UK would get too cold if they went outside in the winter.

"However, this study shows they should be fed over as wide an area as possible.

"This research shows that zoos don't have to make huge changes to how they keep their animals to make a big, beneficial difference to animal behaviour."

Lesser flamingos do not have a breeding season - they breed when they're in good enough condition.

This is often displayed by a "pink flush" in the feathers, Dr Rose said, and the birds then become paler again during the tiring days of early parenthood.

He added: "This study is a great example of why I love working with WWT Slimbridge.

"Based on my observations, I suggested some changes - and the keepers were willing to try them out.

"As a result, we get pinker, more relaxed flamingos."

The colour of individual birds in the study was scored from one (mainly white) to four (mainly pink).

No difference was found between males and females in rates of feeding or aggression.

The paper, published in the journal Ethology, is entitled: "What influences aggression and foraging activity in social birds? Measuring individual, group and environmental characteristics." 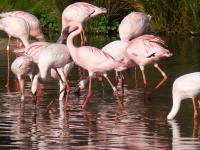