PROVIDENCE, R.I. [Brown University] -- Sharks don't have tongues to move food through their mouths, so instead some use their... shoulders?

So say scientists who used a sophisticated X-ray movie technology to see, for the first time, that bamboo sharks swing their shoulders internally when they eat.

By pulling their "shoulder girdle" back, the sharks create the suction needed to draw food through the back of the mouth and further into the digestive tract, said Ariel Camp, a postdoctoral researcher at Brown University and lead author of the research published in Proceedings B, a Royal Society journal.

"They have this long pharynx, and they have to keep food moving down it," Camp said. "We think this is part of a 'hydrodynamic tongue.' Sharks and fishes that don't have a tongue control the motion of fluid within their mouths to manipulate food."

That means bamboo sharks (Chiloscyllium plagiosum) use their shoulders, composed of a U-shaped girdle of cartilage and various attached muscles, for feeding as well as to control the front-most fins for locomotion, wrote Camp and colleagues from Brown, the University of Alaska at Anchorage and the University of Illinois.

To make the observations, Camp and colleagues used a technology developed at Brown called X-ray Reconstruction of Moving Morphology (XROMM). The system combines CT scans of the skeleton with high-speed, high-resolution X-ray movies, aided by tiny implanted metal markers, to create precise visualizations of how bones and muscles move within animals and people. In the study, the team used XROMM to watch three bamboo sharks feast on pieces of squid and herring.

Bamboo sharks are among several species of shark (and many other fish as well) that use suction to slurp up prey, for instance out of rocky crevices or the silt of the sea floor, Camp said. By opening their mouths widely and quickly, sometimes using muscles deep in their bodies, fish can create the suction needed to draw prey into their mouths.

But many scientists had suspected that the shoulder girdle played no role in shark suction-feeding. It's not connected directly to the jaws or anything else in the head. While sharks use their pectoral fins to swim and even to position themselves over prey with something akin to a walking motion, the shoulder girdle was presumed to be still during feeding.

With the XROMM, however, the scientists could see inside the sharks as they fed and measured a surprising swing in the shoulder girdle of all three sharks tested. Just a fraction of a second after the mouth closed, the cartilage quickly rotated backward (from head to tail) by about 11 degrees.

Though this study only involved bamboo sharks, Camp said she suspects that other suction-feeding sharks also move their shoulders in this way. She further hypothesized that the research may help scientists inch toward answering the question of how the shoulder girdle evolved in sharks, and other fish, in the first place. The way fish skeletal structure evolved, for instance, can help explain how some creatures eventually became capable of making it to land.

"The girdle shows up [in the fossil record], around the time that jaws evolved," Camp said. "We aren't sure exactly what structures it evolved from or how that happened. Part of understanding that history is understanding what were the functions this structure had to carry out."

Apparently it was eating as well as moving.

The National Science Foundation (grants 1655756 and ISO1354189) and the University of Alaska at Anchorage funded the research.

To swallow food, some sharks shrug their shoulders 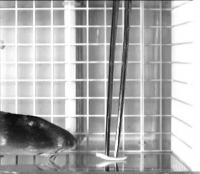