Despite being considered as one of the best studied spiders in the Palearctic, the orb-weaver spiders (family Araneidae) remain poorly known in the central parts of the ecozone. To bridge the knowledge gaps, an international research team of researchers took to the Caucasus, Middle East and Central Asia to study two of those genera: Araniella and Neoscona.

As a result, in their article, recently published in the open-access scientific journal ZooKeys, arachnologists Alireza Zamani (University of Turku, Finland), Yuri M. Marusik (Institute for Biological Problems of the North RAS, Russia) and Anna Šestáková (The Western Slovakian Museum, Slovakia) describe three new to science species, where one: Araniella villanii - carries the name of the flamboyant French mathematician and spider aficionado Cédric Villani, dubbed the "Lady Gaga of Mathematics". Even if unknown until now, the species turned out to have a wide distribution ranging from southwestern Iran to eastern Kazakhstan and northern India.

"It's a well-known fact within the arachnological community that spiders are masters of mathematics and architecture", explains lead author of the study Alireza Zamani. "Orb-web spiders, in particular, tend to build beautiful and architecturally aesthetic webs, some of which are formed in spirals in line with the repetitive pattern of the golden ratio."

The web of the garden orb-web spider Araneus diadematus, for example, usually has 25 to 30 radial threads forming an astonishingly precise angle of about 15°, which the spider carefully measures using its front legs. According to scientific observations, if the front legs are removed, the regularity of the angles between adjacent radial threads is impaired.

For these and many other reasons, spiders must have been an inspiration for mathematicians like Cédric Villani, who has publicly shown a mysterious love for these arachnids. Awarded the Fields Medal (some say it's the Mathematics equivalent of the Nobel Prize) in 2010, and having served as the director of Sorbonne University's Institut Henri Poincaré from 2009 to 2017, the Frenchman's love for spiders is quite evident thanks to the constant presence of a spider brooch on his lapel. Although he has never explained the reason behind his appreciation of these eight-legged wonders, now he has a real, even scientifically sound connection to them in the real world.

Apart from Araniella villanii, whose scientific name honours the prominent scientist and recognises his love for spiders, the other two newly described species also have a story behind their names. One of them: Neoscona isatis, discovered in central Iran, was named after the historical name of its type locality; and Araniella mithra, known from northwestern, central and southwestern Iran, was named after Mithra, the god of light in the ancient Indo-Iranian mythology.

Curiously, spiders in the genus Araniella are green in colour due to certain bile pigments (biliverdin) that make them very difficult to spot in their natural habitat, as they live mostly on leaves.

"I met Mr. Villani in May 2015 at University of Tehran, where he was an invited speaker. We got to briefly talk about our shared interest in spiders, and I had the opportunity to present him an Iranian wolf spider as a souvenir!" recalls Zamani.

"It's important to note that, with the efforts of taxonomists, new species are being discovered and described with an average rate of 18,000 species per year, but simultaneously both known and undescribed species go extinct due to human activities, with the current rate being within or even higher than the range of the newly described ones. A first step towards conservation of biodiversity includes taxonomic research to document species and to define hotspots of species diversity in order to protect such carefully selected habitats," he points out.

"However, with the current situation of low funding for taxonomic research, the number of students doing taxonomic research is in severe decline and the current average 'shelf life' (between discovery and description) of a new species remains at about 21 years. Araniella villanii is a great example of how much we don't know about our biodiversity."

Despite being discovered all the time, new species mostly have very restricted ranges and are only known from a few nearby localities. Orb-weaver spiders have very good dispersal abilities, and it is relatively uncommon to detect new species of them.

"Araniella villanii is known from a few localities in southwestern Iran, eastern Kazakhstan and northern India, a distribution range covering at least ten countries, and yet the species was unknown to science until now. I think that the message that this particular discovery implies is that while there are such widely-distributed undescribed species out there, we need more and more taxonomic research, both in the field and in the natural history museum collections, which house a considerable number of undescribed species, in order to preserve the remaining biodiversity on earth, before it's too late.

A Female Specimen of New Species Named after Cédric Villani 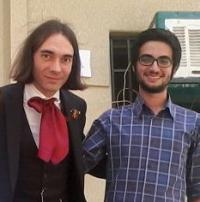