An international research group led by the Graduate School of Medicine's Dr. TAKUMI Toru (RIKEN Center for Brain Science team leader) and Dr. TSURUGIZAWA Tomokazu (NeuroSpin/CEA, France) has succeeded in developing a system to conduct fMRI scans on conscious mice. This method was subsequently utilized to detect brain network dysfunction and monitor neural responses to social cues in autism-model mice. Furthermore, administration of D-cycloserine (DCS) was shown to have some success in correcting social behaviors.

It is hoped that this method of conducting fMRI on conscious mice could make it easier to bridge the gap between invasive research in disease-model animals and clinical research in humans.

The research paper for this study is due to be published in the American Scientific Journal Science Advances on February 5.

Autism spectrum disorder (ASD) is characterized by repetitive behaviors, restricted interests and varying levels of difficulty with social interactions and communication. Research into autism using human genetic studies and animal models has advanced rapidly. It is understood that copy number variations, alterations in the number of copies of specific regions of DNA, are a cause of ASD. This has enabled scientists to develop autism-model mice (15q duplication mice) that exhibit behavior resembling phenotypes seen in patients with ASD. It is hoped that these model mice will enable greater understanding of the disorder. The social behaviors, synapses, serotonin levels and other aspects of these autism-model mice have been studied. However the activity in the brain as a whole has yet to be researched in detail.

Functional MRI (fMRI) can be utilized to understand neuronal activity throughout the brain. However, the majority of fMRI scans performed on mouse models up until now have used anesthetized mice. Even under light anesthesia to suppress body movements, the consciousness of the mice is suppressed and it is impossible to perform cognitive tasks. This makes it difficult to understand brain function. Therefore it has been difficult to compare fMRI scans of anesthetized mice with those of conscious humans.

In order to perform fMRI scans on mice without anesthetic, mice were fitted with head bars that were securely fastened to the head positioning apparatus to prevent head movement (Figure 1). To minimize the effect of stress on the fMRI results, both the wild type (control) mice and autism-model mice received frequent gentle handling and training to acclimatize them to the process. Special ear plugs were made to reduce the noise during fMRI scanning.

Olfaction plays an important role in typical social interactions between mice. The research group investigated the differences in brain activity between autism-model and control mice when exposed to odors of stranger mice. An odor derived from excretions of stranger mice was delivered via a nasal mask to the nose of the mouse during the fMRI scan. It was found that the odor-triggered responses in the olfactory bulb and the cortex of both sets of mice. However, whereas wild-type mice showed significant responses to the stranger odor in subcortical areas across the brain (including the hippocampus which is associated with memory), the autism-type mice did not. Functional connectivity is a synchronization of neuronal activity between anatomically distanced brain regions and is sensitive to psychiatric disorders. A widespread functional hypo-connectivity in the whole brain was observed in autism-model compared to wild-type model.

DCS, an antibiotic used in the treatment of tuberculosis, has been suggested to lessen autism symptoms and aid learning by strengthening neural connections due to its effect on the nerve cell receptor NMDA, however study and trial results have been varied. Treatment of the autism-model mice with DCS was shown to improve reciprocal social interaction times, however it did not have any effect on other autism-like behaviors.

In parallel, diffusion tensor imaging was performed on fixed brain tissue from autism-model and wild-type mice to assess differences in brain microstructure. This revealed widespread abnormalities in the white matter structure and lower functional connectivity across different areas of the brain in autism-model mice, compared to the wild-type mice (Figure 2).

This study showed that it was possible to perform fMRI on conscious mice. This methodology could be utilized to improve understanding of links between neural activity and specific behaviors. These results suggest that it may be possible to obtain fMRI scans showing brain activity and function in conscious mouse models of other disorders.

It is hoped that awake fMRI scans could be combined with other methods (such as immunostaining, genetic engineering and nerve activity recording) to allow for a greater overall understanding of neural function and activity in disorders, from a genetic level to a neural network level. 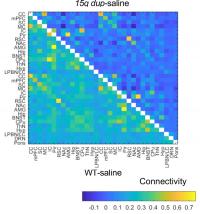