NASA's GOES Project has been busy with animating satellite imagery of Tropical Storm Danny, and has created a movie of him from August 25-27.

The movie begins with an image on August 25 when Danny was just a low pressure area, east of the Bahamas and not yet named. The movie continues through Danny's formation and classification as a tropical storm during the morning of August 26, to the beginning of its journey up the U.S. East Coast today, August 27 at 2:25 p.m. EDT.

Danny's maximum sustained winds at 11 a.m. EDT today, August 27 were near 60 mph, and slow strengthening is expected. He was located near 27.5 north and 73.1 west, or 550 miles south-southeast of Cape Hatteras, North Carolina. Danny is moving northwest near 13 mph, and is expected to turn north. Danny had a minimum central pressure near 1006 millibars.

To download the GOES Hurricane movie from the GOES master scrapbook, visit: http://goes.gsfc.nasa.gov/text/hotstuff.html 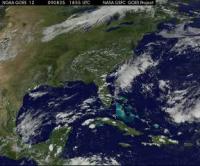