Researchers at the University of Sheffield are using the animal kingdom to help develop sophisticated touch technology for use in intelligent machines, such as robots. The new £5.9M BIOTACT project will bring together nine research groups from seven countries to develop innovative artificial touch technologies, including a "whiskered" robot.

This new technology could have a number of possible applications in modern day society from search and rescue robots that could pick their way through rubble and debris to mine-clearing machines to planetary rovers in space. The technology could also be used closer to home in domestic products, for example vacuum cleaners that could sense textures for optimal cleaning.

While vision supplies information about distant objects, touch is invaluable in sensing the nearby environment. However, in designing intelligent, life-like machines, the use of touch has been largely overlooked, until now.

Led by Professor Tony Prescott of the University´s Department of Psychology, the team will develop new technologies inspired by the use of touch in the animal kingdom. In nocturnal creatures, or those that inhabit poorly-lit places, this physical sense is widely preferred to vision as a primary means of discovering the world.

The Norwegian rat and the Etruscan shrew, for example, use their whiskers to make sense of their environment. The mammals sweep their whiskers back and forth at high speeds in a controlled manner, allowing them to use touch signals alone to recognise familiar items, determine the shape and surface of objects, and track and capture prey.

Using their understanding of the animal kingdom, the team will develop two machines endowed with similar sensing capabilities, including a whiskered robot that can seek-out, identify and track fast-moving target objects.

Professor Prescott said: "Overall, our project will bring about a step-change in the understanding of active touch sensing and in the use of whisker-like sensors in intelligent machines. Today´s life-like machines, such as robots, don´t make effective use of touch. By learning from nature and developing technologies that do use this physical sense, our researchers will be able to enhance the capabilities of the machines of the future."

The project is funded by the EU "Information Systems Technologies" theme, under the "Future Emerging Technologies" (FET) programme.

Robot rat to lead the way in touch technology 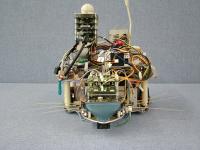