An array of underwater listening lines that detect passing giant Atlantic bluefin tuna previously caught and tagged by scientists has created a new system to monitor these enormous, fast, powerful and lucrative fish in the open ocean.

A 10-year research project using the technology sheds light on the species' natural mortality as well as migration, important information for sustainable management of their populations.

Results of the study, published today in the journal Scientific Reports (at https://go.nature.com/2W6gpEu) demonstrates that giant Atlantic bluefin gather in hot spots for 3 to 4 months a year to feast on their favourite snack foods -- herring and mackerel.

Based on this behaviour, an international team of scientists predicted they might be able to take advantage of their homing behaviour to monitor the bluefin's coming and goings with Canada's Ocean Tracking Network (OTN) -- an array of underwater receivers on North America's east coast, including across the Cabot Strait and the Scotian Shelf off Nova Scotia, Canada. Additional receivers along the North American coastline logged visitation of the bluefin from Canada to the Bahamas, and as far east as Gibraltar at the entrance to the Mediterranean Sea.

Much like an electronic EasyPass collection system on tolled highways, the large bluefin "check in" as they pass across these acoustic "gates," providing an opportunity to monitor their behaviour in consecutive years.

"Atlantic Bluefin are big animals and it took a team of fishers to catch each one individually and pull it up on the deck of their boats so scientists could electronically tag them. By carefully handling the animals, the team was able to tag each tuna with a long-term wearable device, and then record the return of mature and sub-adult Atlantic bluefin tuna for 1-5 years.

"The project utilized the OTN underwater receiver technology that was deployed in strategic locations to capture the coming and goings of multiple species of fish in Canadian waters" said Dr. Barbara Block of Stanford University, the leader of the project.

Each tag emits a unique, coded "ping" which can be detected as an individual ID number, and stored by an array of underwater receivers - allowing them to identify the passage of an individual tagged tuna. One such receiver "gate" lies across the entrance to the Gulf of St. Lawrence across the Cabot Straight, and a second line has been installed on the continental shelf off Halifax, Nova Scotia.

Once a year, data collected on these receivers is downloaded by scientists from Canada's OTN. The data enabled the team to create a quantitative model of their natural survivorship -- a parameter difficult to directly measure empirically that provides information on how long bluefin tuna of the age class tagged (on average ~14 years old) survive in the wild.

"It was a high risk project. No one was completely sure they'd come back with this precision as you have to be relatively close to the receiver to get the data," Block said. "By putting the acoustic tags out year after year in small numbers for almost a decade, and securing the tags tightly to the fish, we have been able to literally count the experimental fish coming into the Gulf of St. Lawrence in summer and detect their exit in the fall."

Starting in 2009, scientists tagged 128 individual Atlantic bluefin tuna with acoustic tags. The first tags were placed on giant bluefin just as the receiver gate was constructed across the Cabot Strait, and this effort has continued ever since, with tags being deployed on approximately 4-25 fish per year and detections continuing to the present for more recent cohorts of tagged fish.

Some of these fish were very large- including one whose length measurements on the deck of the vessel put it over 1,350 lbs (614 kg). Over 31,000 detections were picked up by receivers from Canada to the Bahamas, and all the way to Gibraltar.

"Atlantic Bluefin have an uncanny ability to return with precision to the same ocean areas they were in the year before," said Dr. Mike Stokesbury of Acadia University. "We had observed this fidelity previously with satellite tags. We utilized acoustic tag technology created by Vemco, of Bedford, Nova Scotia, Canada, to track the fish as they passed above the receiver gates."

The study results provide a novel way to monitor the adult bluefin tuna populations as fisheries quotas rise. These are the fish that primarily go to spawning grounds in the Gulf of Mexico and the Mediterranean Sea, and contribute to the next generation of bluefin tuna.

A spatially-structured Bayesian mark recapture model was applied to the acoustic detection data for Atlantic bluefin tuna electronically tagged in the GSL to estimate the rate of instantaneous annual natural mortality.

This analysis showed that tagged bluefin tuna had over 90% natural survivorship one year post tagging and the technique potentially has the capacity to keep track of an individual for 5-10 years.

"Not many things are eating a giant bluefin" remarked Mike Stokesbury.

Atlantic bluefin tuna are fished by over 50 nations, and are currently managed by the International Commission for the Conservation of Atlantic Tunas (ICCAT). Current total allowable catches (TACs) are 28,200 tonnes in the eastern Atlantic and 2,350 tonnes in the West Atlantic. Significant increases in TACs are projected in the next few years, particularly in the eastern Atlantic and Mediterranean Sea where quotas are on target for 36,000 tonnes by 2020.

Despite their economic importance, little is known about the natural survival of bluefin populations, a key parameter for building population models that predict their future numbers in the Atlantic Ocean. Natural survival has so far proven difficult to estimate, but this research provides a new way to refine this estimate.

"The fidelity of these fish to the same spots combined with this large array of underwater receivers makes for a unique opportunity to learn about the survival of these fish under natural conditions, which is important for managing their populations sustainably" says Dr. Whitlock of the Swedish University of Agricultural Sciences.

The scientists consider the project a "proof-of-concept" effort that demonstrates the strength of the technology and the novel capacity for building quantitative models that inform fisheries managers about the status of the populations. The team hopes to continue the study this coming year (dependent upon funding) and encourage an increased use of the electronic tag technology to improve modeling of tuna populations.

Bluefin live a long time (~40 years) for a tuna species, and understanding the fate of the adults is important to understanding their life history. "Bluefin tuna are full of surprises, and I am fascinated with how each individual tends to have preferred routes no different than you or I. Bluefin tuna have favourite fast food hot spots where they like to go, and Canada's Gulf of St. Lawrence attracts fish from both the North American and European population of tunas" Block explains.

The scientists emphasize that the work would not have been possible without the enormous cooperation of a small group of commercial fishers around Murphy's pond, in Port Hood, Ca.

The scientists dedicated the paper to Captain Steve McGinnis, a major participant in the study, who tragically lost his life last summer in an accident unrelated to the study, when out at sea catching Atlantic bluefin tuna with charter clients in the same area. "Stevie was an amazing fisherman and his contributions made this project the success that it has been, it's a great loss for this fishing community," Dr. Block remarked.

Scientists participating in the study were from Stanford, Duke and Acadia University, The Swedish University of Agriculture Sciences of Sweden, and the TAG A Giant project of The Ocean Foundation, in the USA. The project also included Drs. Andre Boustany, Steve Wilson, Mr. Robert Schallert and Mike Castleton. The project was funded by a consortium of government and private funders. Fishers included Captain Dennis Cameron and Bernie Chisolm and their crews.

To view the data, go to: https://www.stanfordblocklab.org/pacific-predator-tracks, click animal detectors, and pick a buoy in the Cabot Strait. 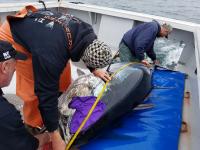 Measuring a Bluefin Tuna Prior to Tagging 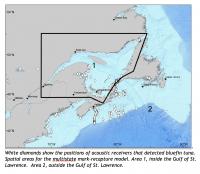